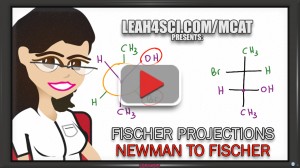 Below is the written transcript of my YouTube tutorial video Converting Newman to Fischer Projections.

Leah here from leah4sci.com/MCAT and in this video, we'll look at to convert between Newman Projections to Fischer Projections and then back from Fischer to Newman. If you missed video you go back and watch that first before you continue this video to make sure you understand and can follow along. You can find the entire series along with my practice quiz and cheat sheet by visiting my website leah4sci.com/Fischer. 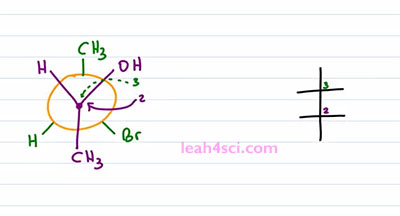 Recall that the Newman Projection is a method of analyzing a molecule that has pre rotation between two sp3 carbons. So that you have for example carbon 2 in a molecule, here but carbon 3 is hiding behind carbon 2. For this specific molecule both carbons 2 and carbons 3 are chiral. So if we convert it to a Fischer Projection we're going to see a 2-dimensional flat structure that not only represents the molecule but also tells us about the chirality from both carbon 2 and carbon 3. You had the option to convert this so that carbon 2 is on top, carbon 3 is on bottom or the other way around. I like to take that fourth carbon and put it down making that carbon 2. The rear carbon up making that carbon 3. But ultimately as long as you're doing it correctly it doesn't matter which way you do it because molecules can rotate in space so what's up now will be down later. If you're not confident with Newman Projection, go back and watch that video series first on my website leah4sci.com/Newman-Projections.

So let's look at how to convert this Newman to a Fischer. We're starting with a Newman Projection in the staggered conformation. Which means the carbon in the front has an opposite orientation to the carbon behind it. On the Fischer Projection, the horizontal line represents the groups coming up and out of the page, which means they're facing in the same direction. So we'll start with the long and tedious process for conversion to make sure you understand every step. And then I'll show you shortcut which when you understand it will save you a lot of time on exams. 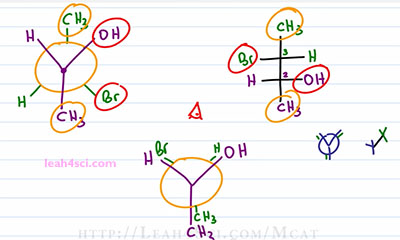 The first thing we want to do is eclipse the Newman projection because we want to see it in a pre Fischer confirmation so that it sorts of start to look like a Fischer and then you just rewrite the groups. What I mean by that is if we have a Newman Projection with the blue carbon infront and the green carbon eclipse behind it, you can almost imagine that as a Fischer Projection that looks like this where the blue carbon in the front has the 2 substituents up and 1 down. The green carbon behind it has that same orientation, that's what we want to keep in mind. And that easily converts into a regular Fischer the way we're used to seeing it. When I look at the Fischer Projection I looked down from the top and see 2 substituents coming up. I wanna rotate the Newman so I have 2 substituents up and one down for both the forward and the rear carbon. That means we keep the forward carbon exactly as we see it with an OH up right, Hydrogen up left and a CH3 going down. And then we'll rotate the rear carbon a hundred and eighty degrees. So if the methyl is up on the rotated molecule, it'll be down. We'll show it slightly offset from the purple substituents to we can make up what's going on.

The Bromine is down to the right so we rotate it up to the left. Hydrogen is down to the left, so we rotate it up to right. And now if you put your eye on top of this molecule, you can see exactly what goes on the right side and what goes on the left side so all we do is superimpose it. We take the forward carbon and bring it to the bottom and the rear carbon to the top. The forward carbon has an OH to the right, Hydrogen to the left and a CH3 going down. The rear carbon has a Hydrogen to the right, Bromine to the left and a CH3 going up, and there we have our Fischer Projection. 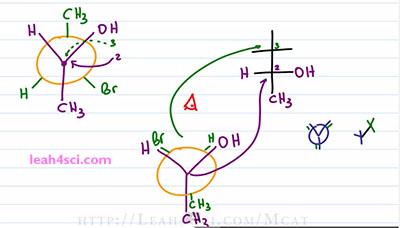 That wasn't too bad. Now let's try to do it a little faster. But before we do, I wanna point out something critical on the starting molecule. Notice that the OH and the Br are on the same side of the molecule on the Newman but they're on opposite sides on the Fischer and that's because the starting Newman is staggered and we have to rotate it so that the two extremes are both facing down. That's the two methyl group which will wind up on opposite ends of the Fischer Projection. So the key here, the trick to recognize is that when they start out on the same side in a staggered conformation, they have to wind up on opposite sides in an eclipsed conformation assuming we're doing a hundred and eighty degree rotation. You can do other degrees to get different molecules, but why would you wanna give yourself that headache if you can keep it simple?

Ones again, here's our starting molecule and we'll draw a Fischer Skeleton. I like to start with a carbon that has the two upper substituents. For this Newman it happens to be the forward carbon in your example it could be the rear carbon, it doesn't matter. I like to put the forward carbon on the bottom and since this is the one that has the two upper substituents, I put the OH where I see on the right, the Hydrogen where I see on the left and the CH3 going down. The next step, the shortcut is to recognize that we need the rotation. The CH3 is up, it will get rotated down and that means it's on the extreme of the molecule, or recognize that it starts out by itself on a Newman meaning it's not paired with something so it winds up by itself on the Fischer. The Bromine and Hydrogen are oriented right and left, but because they have to undergo a 180 rotation, they're going to go left and right. So the Bromine instead of right, goes left and the Hydrogen goes to the right. How do I know? If they are on the same side when the Newman is staggered, they have to be on opposite side when we turn it into a Fischer because they have to first undergo that eclipsed formation. Now what happens if you're given a Fischer Projection and ask for the Newman? This one is much easier. Start up by drawing a circle for your Newman Projection and then choose where you want to place your carbons. I want the green carbon forward and the purple carbon to the rear. You can draw the Newman as Staggered or Eclipsed and this will depend on what your professor asks for or the choices that are are .. represent from your exam. Let's start with Eclipsed because that's much easier. 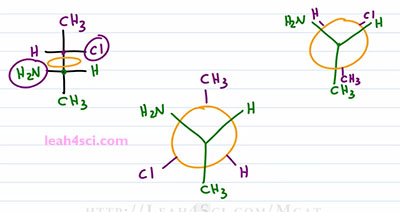 Just draw a circle in between the green and purple carbons and that's exactly the circle that you see on the Newman Projection. For the forward green carbon I have a Hydrogen on the right, NH2 to the left and a CH3 going down. And for the rear carbon, don't forget, this represents down on a Fischer Projection so I have a CH3 going down, a chlorine up to the right and a Hydrogen up to the left. That was very easy. Now what happens if you want the staggered conformations? You have two options. The first option is to draw the eclipsed conformation and then rotate one of your carbons a hundred and eighty degrees or you can do the shortcut by starting with one carbon exactly as you see it and using that trick of when you rotate at the group switch to the second carbon. So we'll start out with the green carbon as we see it. Hydrogen up right, NH2 up left and a CH3 going down. The rear carbon will be rotated which means that if the Hydrogen and Cl are together on a Fischer, they have to be opposite on the Newman. So if we draw the staggered, chlorine will now be on the same side as the NH2, so we'll put the chlorine down towards the left. Hydrogen will be on the same side as the other Hydrogen and the CH3 goes on top.

Be sure to join me in the next video where I show you how to convert a sugar that's in a Fischer Projection to the Hayworth or Chair conformation. You can find my entire series on Fischer Projections alongwith my practice quiz and cheat sheets by visiting my website leah4sci.com/Fischer.

While the pre-2015 MCAT only tests you on science and verbal, you are still required to perform … END_OF_DOCUMENT_TOKEN_TO_BE_REPLACED

Keto Enol Tautomerization or KET, is an organic chemistry reaction in which ketone and enol … END_OF_DOCUMENT_TOKEN_TO_BE_REPLACED