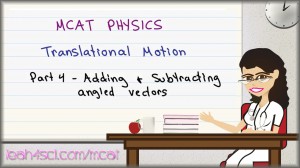 Leah here from leah4sci.com/MCATPHYSICS and in this video we’ll continue our discussion on Adding and Subtracting vectors focusing on Vectors that are given at some angle feda where you have to find the X and Y components.

If you missed the first parts of this video, go find it on my website at https://leah4sci.com/MCATPHYSICS. Let’s start with the simple question to review and then go into angles.

The total Resultant Vector is a line going from the very first tail to the very last head and we call that R for our Resultant. The reason I chose this example is because on the MCAT, in addition to knowing Math equations and how to solve them, you also want to look out for tricks and patterns that will save you time. 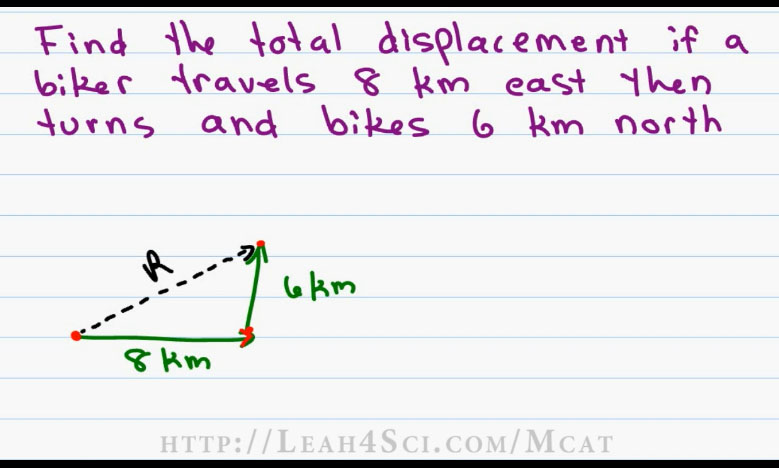 Notice that we have 6 and 8. Six is two times three; eight is two times four so we expect the Resultant to be two times five for a total of ten kilometers. Now let’s prove it mathematically. 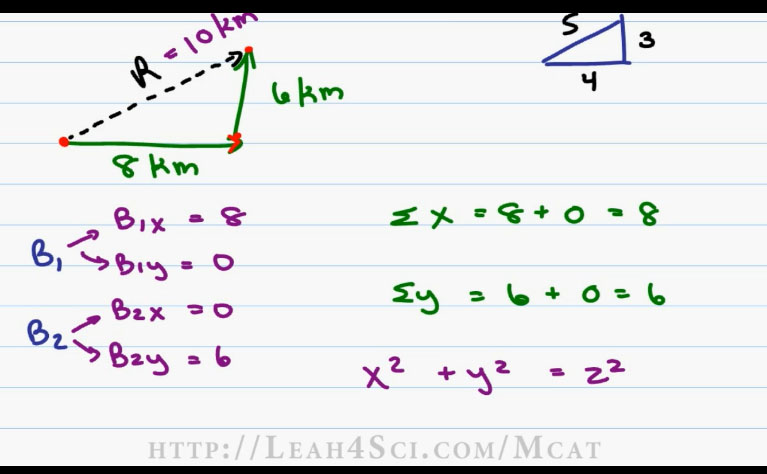 Know this formula and be confident enough that you don’t have to write it this way, instead you should simply write the Resultant is equal to the square root of X squared plus Y squared. In this case x squared is eight squared or sixty four, Y squared is six squared or thirty six. If we have sixty four and thirty six, sixty and thirty is ninety, four and six is ten which gives us ninety plus ten or a hundred, that means the resultant is the square root of one hundred which is equal to ten and that’s the number we initially predicted.

If you’re not comfortable with the multiplication that we did here, download my Math Study Guide Cheat Sheet which you can find on my website at https://leah4sci.com/MCATMATH. 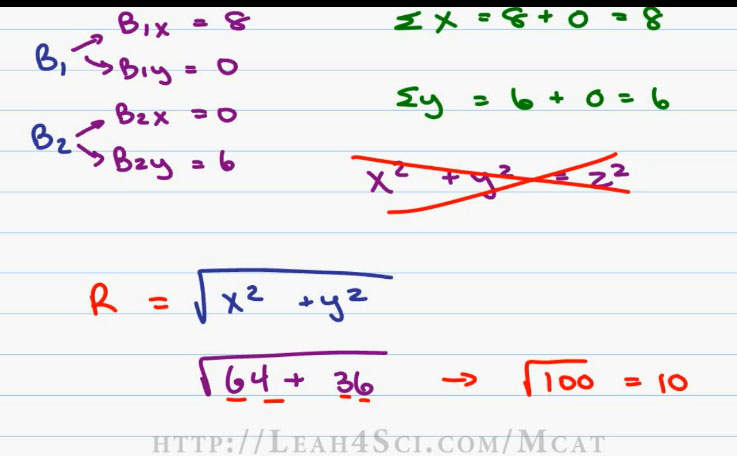 Here’s another question that you may find in your MCAT practice material. Now keep in mind the MCAT will not ask you something this tedious and detailed when it comes to Math because they’re testing you in your ability to apply equations and concepts, they’re not looking for you to waste an hour on a single Math calculation. The reason I’m including this is because I want to make sure that you’re comfortable with every single component that shows up within this question so that you’ll know what to do if you’re face something along this line. The question says:

Find the total displacement if a dog runs 59 meters at 45 degrees to the horizontal, then turns North running 31 meters at 30 degrees with respect to the vertical.

This is a little bit of a tricky question so make sure that you break it down and understand what’s going on here. For something like this, it helps if you draw a quick sketch and then work of the sketch rather than trying to pick the numbers out of the story. 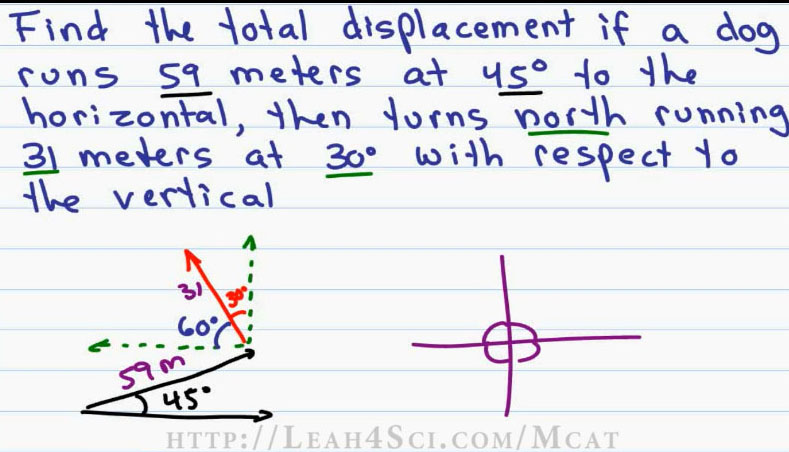 This trips off a lot of the students so be careful. If we draw a vertical or a Y component, it helps if you can also see an x component for that new set. It’s almost like we’re putting two different graphs together. If we have 30 degrees with respect to the vertical, that’s 30 degrees from the Y axis and not the X axis. If we draw a 30-degree angle and then start to calculate, we’re looking for everything to fit into a single coordinate system and that means we want all angles to be with respect to a graph that comes out of here. 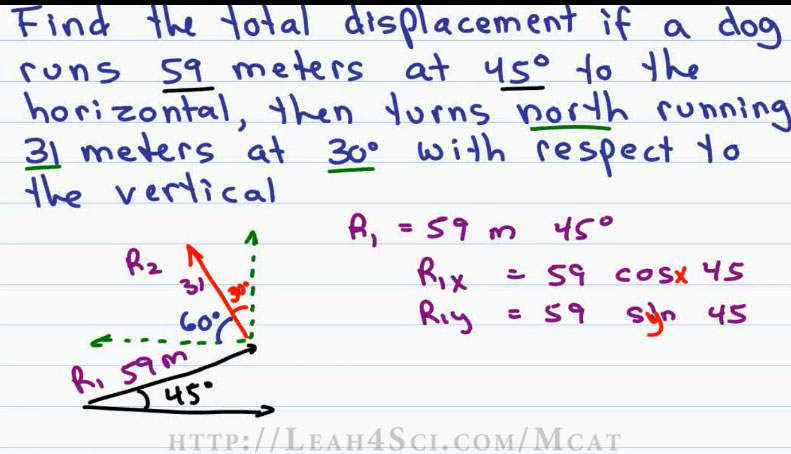 The reason I need to use Cos for X and Sin for Y is because I’m referring to my trick of spelling cos with an x and syn with a y. I talked about this trick in my Trigonometry video which you can find on my website at https://leah4sci.com/MCATMATH. In that video I also talked about the shortcut values to memorize for the Sin and Cos values. 45 degrees is going to be the same for Sin and Cos and we’re using the value of 0.7 and so we have 59 times 0.7 for the X and y values.

Calculating this exactly will take too long so we’ll take the shortcut of rounding 59 to 60, that’s very close and multiplying 60 times 0.7. I’ll use the trick of times ten divided by ten or move one decimal to the right and one decimal to the left. Also a topic covered on my Math videos and that means I move this one to the right and this one to the left giving me six times seven which is forty two. 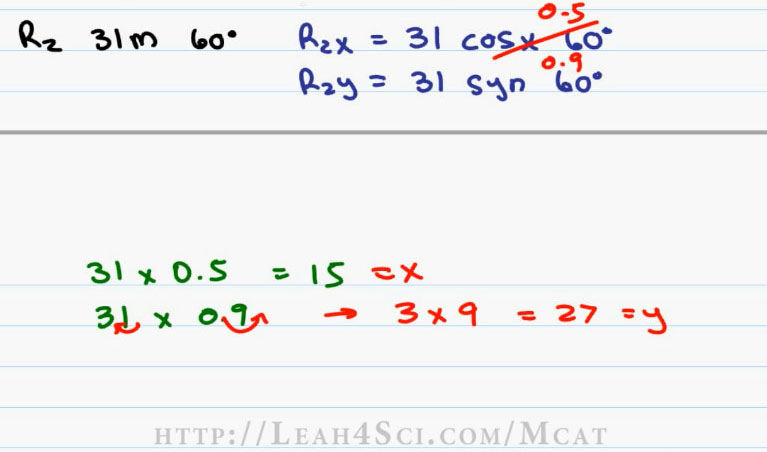 Now that we have our Vector components we wanna add them up. So we’ll have the sum of X is equal to X1 plus X2 (εx=X1+X2). The sum of Y is equal to Y1 plus Y2( εY=Y1+Y2). X1 is forty two (42) and X2 is fifteen (15) but be careful about the direction. Notice that R1 goes to the right which is a positive direction, R2 goes to the left which is a negative x direction and so it’s really plus negative 15 or simply minus 15. Forty two minus fifteen is a little hard to do, you can try forty minus fifteen which is twenty five then add back the two giving you twenty seven (27). Y1 is forty two Y2 is twenty seven, forty and twenty is sixty, two and seven is nine giving us a value of sixty nine (69).

And now we solve for the Resultant. The resultant is the square of X squared plus Y squared, in this case the square of twenty seven squared plus sixty nine squared ((R=√(〖27〗^2+〖69〗^2 )) . These numbers are very hard to do the long way so we’re going to round. And since we’re rounding everything up, we’re going to assume that our answer will be slightly less. Remember we’re making our numbers bigger so make sure you compensate by making your answers slightly smaller. We’ll square thirty and seventy. 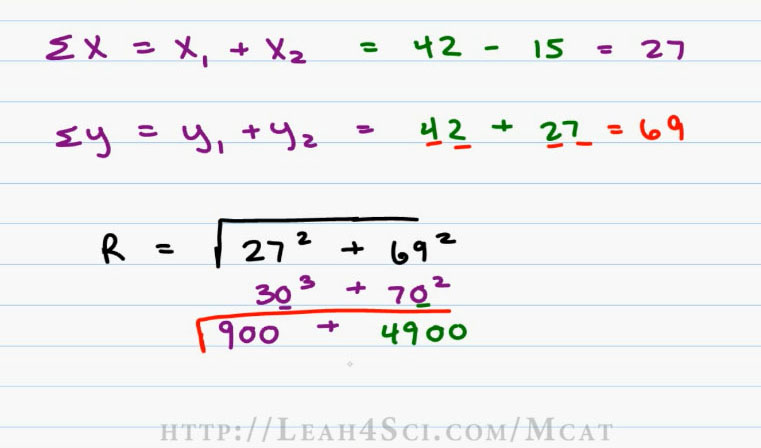 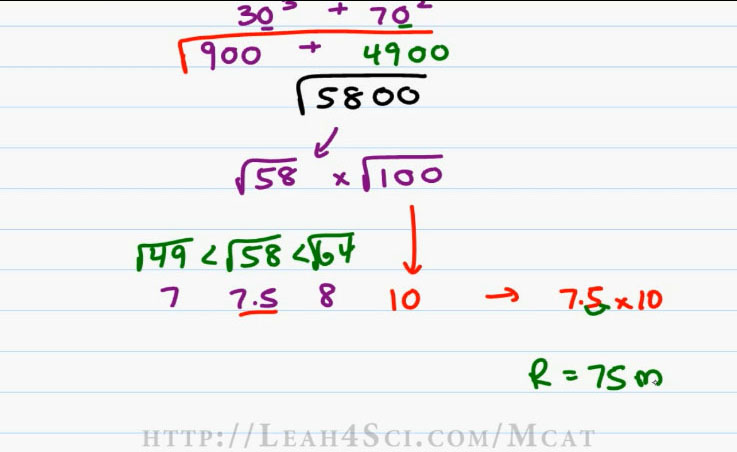 Keeping in mind that we did a lot of rounding to get to where we are, I punched the initial values into the calculator and got an answer of Seventy three point three (73.3) which given the amount of rounding we did is very very close. Now remember, on the MCAT you will not have this many steps in a single question but you do have to know how to approach this in case you’re faced with a question that is similar to any part of this long question that we just solved.

Be sure to join me in the next video where we start our discussion in Kinematics by talking about speed and velocity as it appears on the MCAT.

Are you overwhelmed by the sheer volume of information required for the MCAT? Are you worried that lack of a proper study plan and low MCAT score will prevent you from getting into Medical School? My new ebook The MCAT Exam Strategy is 6-Week Guide to Crushing the MCAT will help you formulate a concrete study plan by helping you figure out where you stand now, identify your goals and figure out what it takes to reach them and it’s yours FREE when you sign up for my email newsletter at MCATExamStrategy.com. By signing up for my email newsletter, you’ll also be the first to know when I have new videos, MCAT Study Guide Cheat Sheets, Tips and so much more! The link again MCATExamStrategy.com.

While the pre-2015 MCAT only tests you on science and verbal, you are still required to perform … END_OF_DOCUMENT_TOKEN_TO_BE_REPLACED

Keto Enol Tautomerization or KET, is an organic chemistry reaction in which ketone and enol … END_OF_DOCUMENT_TOKEN_TO_BE_REPLACED