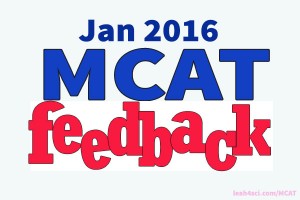 2016, this is the second year of the new 7.5 hour MCAT. It’s clear that the AAMC is still trying to figure out the nature and direction of the exam based on the feedback of students who tested throughout 2015.

While we know much more about the style and format of the new exam, it appears they are still testing and tweaking the overall exam format despite 2016 coming with hopes of clarity and consistency.

Unfortunately not everyone who registered for January was able to test thanks to the blizzard that swept the mid/upper East Coast but I did hear from a handful of students who took the MCAT on January 22nd and 23rd, 2016. Some of them were repeat MCAT testers and were able to compare their 2015 experience to the January exam.

Students testing on the SAME day reported DIFFERENT concepts and specific topics tested. This leads me to assume there was more than 1 version of the MCAT given on a single day.

Comments  varied greatly from reports of “Lots of genetics questions”’ to “Nothing related to genetics.”

Is this good or bad news?

The answer is, “GOOD!” It means you cannot take someone’s feedback and think, “ So if they were tested on magnetism, I will be too.”  Instead, realize that any topic on the AAMC outline is FAIR GAME on test day!

However, there were also many similarities between the January MCAT exams.

This section was surprisingly heavy with biology and biochemistry, considering that this section is supposed to test just 25% biochemistry and 5% biology.

The January MCAT had lots more physics when compared to the September 2015 version. But it wasn’t just straight up physics. Physics concepts were tested in relation to biological systems.

It’s all about understanding the living organism and how it relates to general chemistry, biochemistry, and yes, even physics. The prior 2015 exam had lots more general chemistry but again, strongly related to biological systems.

This section was relatively math heavy. Nothing too tricky but it REALLY HELPED these students to go through the “Math Without A Calculator” video series.

Knowing equations was REALLY helpful for this section but not just the equations alone. You must be very familiar with the units involved for each equation too.

To demonstrate this point, let’s take a simple equation like F = ma where the units are measured in newtons (N). (Click Here to Review)

What are Newtons comprised of? Newtons can be defined with units of kg times m/s^2

Knowing the units of equations helps you pick out the right answer EVEN IF you weren’t too confident with your calculations. Matching up units and concepts helps you rule out at least one or two incorrect choices. This gives you a quick 50% chance of guessing correctly even if you don’t know the answer.

This section is still a tricky one to prepare for. The AAMC unscored sample test and the first AAMC scored full length (see MCAT Resources) did not do a great job preparing students for the real thing.

The real MCAT passages were longer and harder. The questions are VERY unlike the old MCAT verbal section where there was a heavy focus on getting details from the passage.

This exam had many questions asking you to infer information based on what you’ve read.

“What would the author say to a situation… “ where the situation was NOT discussed in the passage, for example.

Given the length and outrageous nature of the passages, your best bet is to practice and build up your endurance using the Newspaper Strategy in addition to practice, practice and more practice.

The CARS questions themselves were both easier and less confusing when compared to Kaplan full lengths. The other companies were off base too.

As expected, this section was heavy on biology and biochemistry. Students were tested on some very in-depth information like the names of specific enzymes, hormones, and molecules.

Biological pathways and reactions were outlined in passages asking students to identify specific aspects of the reaction (Organic Chemistry) or understanding the TYPE of reaction/chemical change that took place (such as redox).

Some of the passage-based questions were stand alone, ‘discrete’ questions loosely relating to the topic of the passage. Knowing your basics will help you earn ‘easy’ points here.

Much of this section was intuitive, but mostly it was a question of how well you memorized material for this section, like names, concepts, terminology, definitions.

Therefore, create flashcards from the start and carry them in your pocket ALWAYS. The audio strategy is also great for studying terms and definitions on the go.

Next-Step exams are highly recommended (discount on the MCAT resources page), especially for this section, and Khan Academy was surprisingly helpful on this too. (This student didn’t like Khan questions for the other sections)

And the good news is that this section appeared EASIER than the new scored full length MCAT if you had your terminology down.

You may want to consider breaking up the Kaplan exams and simply using the psych/soc section for passage practice. While they don’t sell exams outside of their course, they do offer 3 free online exams when you purchase their complete books set (see MCAT Resources).

Overall Feedback on the January MCAT

While the AAMC full lengths are closest to the real thing, the consensus was that NO exam company came close to this one. The AAMC appears to be moving in another direction with a testing style closer to the question bank and new section bank (just added to the MCAT Resources Page) with a focus on Biochemistry, Psychology, and Sociology.

The sections themselves were lengthy and many questions relied heavily on the passage while some of the sciences were discrete within the passage-based questions.

The AAMC scored exam was closest to the real thing. The January MCAT Bio/biochem was MUCH, MUCH HARDER than any full-length company including the AAMC exam.

Next-Step exams were highly recommended, Kaplan for the final section, while TPR did not even come close. I was unable to get feedback for the other exam companies.

Pay Attention To WHAT the Question is Actually Asking

The MCAT featured long and tedious passages. Many contained details that were unimportant and certainly NOT tested. The key was to balance your time and QUICKLY get through the passages leaving you more time to:

What about you? What questions do you have for students who tested in 2016?

How To Draw, Name, Recognize and Memorize 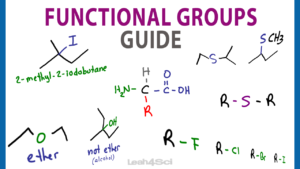 While the pre-2015 MCAT only tests you on science and verbal, you are still required to perform … END_OF_DOCUMENT_TOKEN_TO_BE_REPLACED

Keto Enol Tautomerization or KET, is an organic chemistry reaction in which ketone and enol … END_OF_DOCUMENT_TOKEN_TO_BE_REPLACED