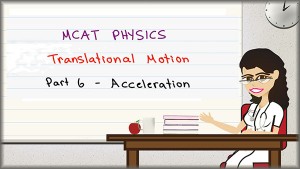 [Start Transcript]
Leah here from leah4sci.com/MCAT and in this translational motion video I’ll take you through the concept of Acceleration.

You can find my entire video series on Translational Motion by visiting my website https://leah4sci.com/MCATPhysics

Unlike the topic of Velocity, Acceleration can be a little more difficult to understand intuitively. Acceleration is a Vector quantity defined as the change in velocity over the change of time. In other words, we’re looking at how quickly something can increase or decrease in speed usually at a consistent rate.

A cyclist increases his velocity from rest to 4.5 m/s in a span of 5 seconds. Find his acceleration.

The formula for acceleration is the change of velocity over the change in time or simply change in velocity over time. If we break this apart, delta v is really V final minus V initial, you’ll also see it written as V with a small zero which stands for V knot or the initial velocity and we divide that by t.

Plugging in the numbers, we have 4.5 meters per second as the velocity and 5 seconds is the time. Always mark your units and cancel units to make sure you’re on the right path. We’re looking at the equation of 4.5 divided by 5 which involves a decimal and a fraction, that you have to do that without a calculator.

Don’t let this confuse you, we’ll use the multiply the top and bottom by ten trick or move over the decimal so we’ll move the decimal to the right, the imaginary decimal to the right. Now we have 45 divided by 50 which you can think of as 45 over 5 times 10. This makes it so much easier. Both 45 and 5 can be divided by 5. Forty five by five is nine, five by five is one and that gives us a new equation of 9 over 1 times 10 which is 9 over 10. 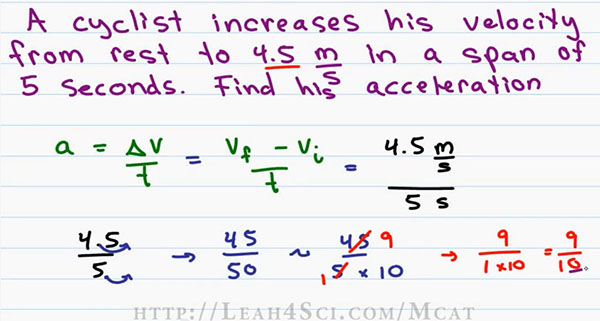 Now we’ll use the trick of dividing by ten. 10 has one zero so we move the decimal back one space and the answer is 0.9. If you’re not comfortable with the Math I used here, go back to my website https://leah4sci.com/MCATMath where I have an entire video series showing you all these MCAT Math without a calculator trick. 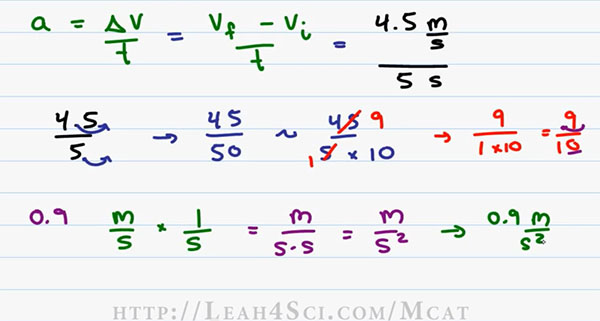 That was a pretty straightforward example, now let’s play with the equation a little bit so that you’re comfortable solving Acceleration questions no matter how it’s presented.

The equation for acceleration is given as the change in velocity over the change in time. But what if you’re asked to solve for something like the Final Velocity? To solve for Velocity, the first thing we want to do is to isolate it so we’ll multiply both sides by t, this cancels it out on the right giving me a new version of the equation, delta V is equals to a times t.

Delta V is V final minus V initial equals “at”. And now let’s say we want V final let’s move V initial to the other side. It’ll be plus V initial, plus V initial. Let’s rewrite it into the form which you’re probably more familiar with, V final is equal to V initial plus at (Vf =V i+ at).

This is the form that I initially studied when I learned this in Physics, this is also the form that you’ll see on my Kinematics cheat sheet on my website at https://leah4sci.com/MCATPhysics. Keeping in mind, many times your Acceleration question will have an initial Velocity of zero just cancel that out, giving you an even simpler form of V final is equal to at or simply V is equal to at.

Now let’s say you’re asked for Time. To solve for time in the denominator, the first thing we wanna do is move it to numerator, we’ll multiply both sides to cancel it out this gives us delta V is equal to at. Now we wanna isolate T so we’ll divide both sides by the acceleration giving us a new version of the same equation t is equals to delta v over a. 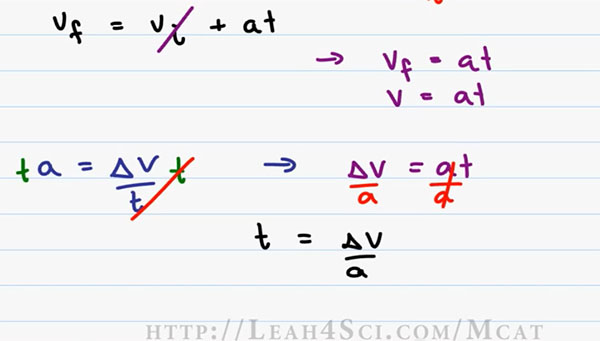 I worked through these because I don’t want to fall into the trap of memorizing every single form. Instead I want you to understand the formula, understand how to move the unit around so that no matter how it’s asked, you’ll know how to tackle the question.

Our cyclist from above is coasting at 7.5 meters per second when he hits the breaks. How long does it take him to reach a complete stop if he slows with an acceleration of -2.5 m/s²?

This seems like a simple equation, except that we’re asked for time instead of acceleration or velocity. So we’ll manipulate the equation as we saw earlier. We’ll use the version t is equal to delta V over the acceleration in this case delta v is V final minus V initial.

Once again we’re dealing with decimals and fractions which is confusing so we’ll use the trick of moving the decimal over to the right for the numerator and denominator, this gives us an easier version of the equation seventy five over twenty five. Both numbers easily divide by twenty five. Twenty five into Seventy is three, twenty divided by twenty five is one. Three over one is simply three. 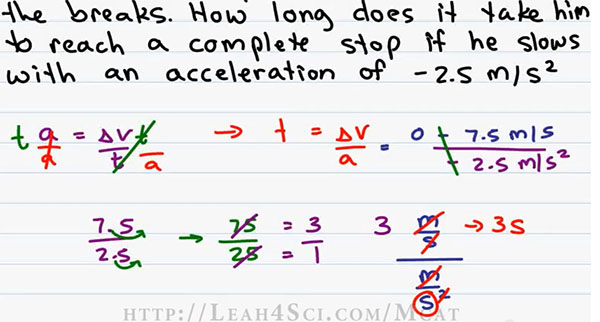 Be sure to join me in the next video where I tackle a more complex form of acceleration as it comes up in Gravity and Free fall questions.

Are you overwhelmed by the sheer volume of information required for the MCAT? Are you worried that lack of a proper study plan and low MCAT score will prevent you from getting into Medical School? My new eBook The MCAT Exam Strategy is 6-Week Guide to Crushing the MCAT will help you formulate a concrete study plan by helping you figure out where you stand now, identify your goals and figure out what it takes to reach them and it’s yours FREE when you sign up for my email newsletter at McatExamStrategy.com. By signing up for my email newsletter, you’ll also be the first to know when I have new videos, MCAT Study Guide Cheat Sheets, Tips and so much more! The link again McatExamStrategy.com.

While the pre-2015 MCAT only tests you on science and verbal, you are still required to perform … END_OF_DOCUMENT_TOKEN_TO_BE_REPLACED

Keto Enol Tautomerization or KET, is an organic chemistry reaction in which ketone and enol … END_OF_DOCUMENT_TOKEN_TO_BE_REPLACED