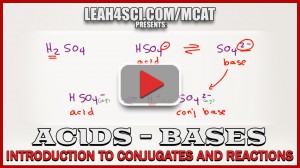 Below is the written transcript of my YouTube tutorial video Introduction to Acid Base Chemistry Conjugates and Reactions.

If you prefer to watch it, see Video HERE, or catch the entire MCAT Acid Base Series.

Leah here from leah4sci.com/MCAT and in this video series we’ll look at acids and basis specifically focusing on the calculations that’ll come up on your MCAT.

This is a continuation from my Organic Chemistry acid base series where I look more at concepts but now let’s switch over to pH, pOH, ka, pKa, kB, pKb and all those intra conversions. You can find my entire series along with practice quiz and cheat sheets by visiting my website at leah4sci.com/MCATAcidBase.

Let’s start with a quick review of Acid Base concepts. On the AAMC outline it’s just the Bronsted-Lowry but I wanna go through all three to show you the relationship between them and how you should think of them together and the concept rather than memorization.

Then Mr. Bronsted and Lowry came along and said wait! But what if the molecule is not dissolved in water? Can it still be an acid or a base? And the answer is yes! If a molecule can donate an H+ regardless of the solution, it’s still considered an acid and if when not in water we don’t necessarily have OH-. But if a molecule can accept an H+ then it is considered a base regardless of the solution.

That means the electrons are negative or partially negative. So we can reason that a base is negative or partially negative. And if you look at it from this perspective it’ll be much easier to analyze molecules when the charge isn’t what you expect or when the proton isn’t clearly visible. Because if you’re given two molecules to compare and you’re trying to figure out which is the acid and which is the base, just look for the one that is more positive, that’s your acid, the one that is more negative, that’s your base.

Let’s take a look at a quick example. Sulfuric Acid H2SO4 is a diprotic acid. Di meaning two, it has two hydrogen, two protons to give away. And when it does so, we can get two conjugates. We can get HSO4- or we can get SO4 2-. Now these two are in equilibrium with each other. If we have a reaction where HSO4 goes to SO4 2- and we’re trying to classify one is the acid, one is the base, well I see a hydrogen here but it’s negative and I also see a negative here so the question is which is the acid and which is the base? This is where we use the trick of the more positive is the acid and the more negative is the base. They’re both negative but negative one is less negative than negative two making it the more positive molecule so we’ll call this the acid and negative two is more negative than negative one making it the base and here we have our acid base pair.

How is it possible for the acid to be negative? If you wanna get technical, HSO4 minus act as an acid in solution because it dissociates to give you an H+ and an SO4 2-. Here’s the SO4 2- that we looked at. H+ is given off, a molecule that gives off that H+, an H+ donor is an acid. On the MCAT a lot of calculations and a lot of acid base reactions will be dissolved in water or some sort of aqueous environment. For example in the blood, in the stomach, you’re expecting the solvent to be water. And so if you see aqueous after the molecule, just assume that it is dissolved in water and treat it like your standard acid base calculation.

When I showed you this reaction, I mentioned that if we started with the acid, the sulfate that forms as a product is considered a conjugate base. You can think of the conjugate as the molecule that forms when an acid or a base reacts in solution. An acid will donate a proton and form a conjugate base and a base will accept a proton to form a conjugate acid. For example if we have Hydrochloric Acid HCl, it’s a strong acid, we’ll show a one way arrow because the reaction goes to completion and gives me H+ and Cl- in solution. HCl is a strong acid, H+ is what we expect to come off the acid and Cl- is the base that forms in this case the conjugate base. Conjugate is simply that which forms after the acid or base react and we can call HCl and Cl conjugate pairs. We have the acid paired up with its product base.

Let’s take a look at another reaction. If we have ammonia which can act as both acid and base. In this case it reacting with an H+ in solution to give me a product at equilibrium of NH4 plus. Ammonia will accept the proton to form ammonium. Ammonia because it’s accepting a proton is acting as a base and Ammonium which has accepted the proton is the conjugate acid. We can prove this concept with the trick I showed you in the beginning where the more positive is the acid and the more positive is the base. Ammonium has a charge of plus 1, Ammonia is neutral, plus one is more positive than neutral making it the acid and zero is more negative than plus one making it the base. Once again we verify our acid and base here.

The first thing I want to do is to figure out what is my acid, what is my base. But if neutral reacts with neutral, how do I know? I simply pick one conjugate pair and it doesn’t matter which one and figure out which of the two is more positive and which is more negative? More positive is acid, more negative is base. We’ve already Ammonia and Ammonium so let’s take a look at the Oxygen compounds.

Water is neutral, Hydroxide is negative. Negative is more negative than neutral so that makes the OH- a base. But because it’s the product, we’ll call it the conjugate base. That makes water the acid because the acid will react t give me a conjugate base. By default I know that this has to be a base because it’s reacting with an acid but don’t take my word for it, let’s prove it. If we have ammonia neutral and ammonium positive, plus one is more positive than neutral making it the acid but because it’s the product we’ll call it conjugate acid and ammonia neutral is more negative than plus one making it the base, because it’s a reactant it’s just a base.

Now how do I know that the reactant is just acid base but the products are conjugate acid and conjugate base. And the answer is, it’s just the technicality because if this is the reaction at equilibrium I can write the same reaction backwards. I can show that NH4+ react with OH- to give me Ammonia NH3 plus water H2O. Ones again I have conjugate pairs, Ammonium with Ammonia, Hydroxide with Water and once again I compare the conjugates ammonium is more positive making it an acid versus Ammonia a base which is neutral. Hydroxide is negative which is the base compared to water which is neutral making it the acid. But now where Ammonia and water are the product, ammonia is my conjugate base and water is my conjugate acid. So no matter which way I write the equation my products get the name conjugate in front of the name and the reactants are simply acid base.

Be sure to join me in upcoming videos where we look at how to calculate pH and pOH for strong acids strong bases, weak acids, weak bases and more. You can find this entire series along with practice quiz and cheat sheet by visiting my website leah4sci.com/MCATAcidBase.

Are you overwhelmed by the sheer volume of information required for the MCAT? Are you worried that lack of a proper study plan and low MCAT score will prevent you from getting into Medical School? My new eBook The MCAT Exam Strategy is 6-Week Guide to Crushing the MCAT will help you formulate a concrete study plan by helping you figure out where you stand now, identify your goals and figure out what it takes to reach them and it’s yours FREE when you sign up for my email newsletter at MCATExamStrategy.com. By signing up for my email newsletter, you’ll also be the first to know when I have new videos, MCAT Study Guide Cheat Sheets Tips and so much more. The link again MCATExamStrategy.com.

While the pre-2015 MCAT only tests you on science and verbal, you are still required to perform … END_OF_DOCUMENT_TOKEN_TO_BE_REPLACED

Keto Enol Tautomerization or KET, is an organic chemistry reaction in which ketone and enol … END_OF_DOCUMENT_TOKEN_TO_BE_REPLACED