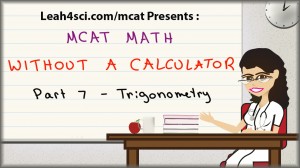 Below is a transcript of my tutorial video: MCAT Math Vid 7 – Trigonometry Sin/Cos Values

Leah here from Leah4sci.com/MCAT and in this video, I’ll show you how to work through Trigonometry related problems on your MCAT without a calculator.

When you think of Trigonometry you’ll probably thinking SOHCAHTOA, so let’s see how that applies to the MCAT. SOHCAHTOA breaks down as follows: We have Sin, Cos and Tan. Without going into too much boring Trigonometry, let’s see how to look at this Triangle.

When given some angle theta, you put this line to represent the angle in question, the two sides of the triangle that form the right angle, the adjacent is the side of the triangle that is near your angle, the opposite is the side of that triangle that doesn’t touch your theta value but is still part of that ninety degree or right angle, and finally the line the connects the adjacent and the opposite but is not part of that ninety degree that is called your Hypotenuse. We’ll use SOHCAHTOA to find Sin, Cosin and Tangent. Sin is Opposite over Hypotenuse or typically this line over here. Cosine is Adjcent over Hypotenuse and is referring to this line over here and Tangent is simply the Opposite over the Adjacent. If you learn Trigonometry you worked on many different angles and set them up in many different ways.

Before we can go into a Math problem, we have to know how to calculate the Sin, Cos, Tan values without using a calculator. Since Tan is Y/X that’s simple division and we won’t look at that. Instead I want to focus on the values for Sin and Cos as we want to think about them on the MCAT. For example, you may get a question that asks you to calculate the Sin value or Cos value of 45 degrees. But if you think the Cos of 45 is radical two over two, that may be correct in a Trigonometry class but how are we going to do that in the MCAT?

Now, what you need to know is a simple rounded number that you can easily use in calculations to help you quickly work through the Math and come up with the correct answer.

I’m going to show you the proper values for Sin and Cos but I also want to show you a trick and a shortcut to help you quickly come up with the numbers even if you get stuck or even if you panic. We’ll look at this simple coordinate system where you have zero degrees to the right, ninety degrees above and simply work our way around, a hundred eighty degrees left and two hundred seventy at the bottom.

I want you to imagine that starting from the origin, I draw a line that has a unit length of one. Remember the trick, we spelled “Syn” with a Y and “Cosx” with an x. This is to help you quickly identify your Sin and Cos values. In fact let’s create a table and match the trick to the values on the table. We have the table, now let’s see how this diagram will help us come up with the values.

If this line with the unit length of 1 is sitting parallel to the X-axis at zero degrees, the Cos or the X-value is one because the line has a length of one a height of zero so the x-value or the length of one gives us a Cosx of one for zero degrees and Syn of zero for zero degrees because we haven’t raised it anywhere in the Y direction. Keep in mind this is not drawn to scale but imagined that I now raised this line to Thirty degrees.

If draw it to scale the tip of that ray will be halfway up between x and y and that means the Syn value of Thirty degrees is half or point five, the Cosx value on the calculator comes to .866 but on the MCAT you can get away with using point Nine. Now you can memorize point .866 but this trick will be easier if you’ll recognize that point eight six six is very close to point nine and that on the MCAT, when you round, your answer will typically be close enough.

If we raise that line to Forty five degrees, notice that our Cosx value keeps getting smaller and smaller. Here we’re at one, here we’re at point nine, here we get to something that the calculator will call point seven o’seven, for the sake of memorization, we’ll just keep it at point seven.

The Syn value or the Y value has gone from zero to point five and now we’re slightly higher at point seven o’seven which ones again is rounded to zero point seven. Let’s take this ray and raise it up even more moving up to Sixty degrees. Notice that the x-value is halfway between the origin at a  length of one giving me a Cosx value of point five. The Syn value on the other hand is getting higher and higher and is nearly at the top for a calculated value of point Eight Six Six and a rounded value of zero point nine.

So on your MCAT, yes you can use point seven, point eight six six if you have to but if you want to have that ballpark first to figure out where to start with your angles.  Draw that quick sketch with the zero for Cosx and then just write one, point nine, point seven, point five and figure out where you stand based on the angle you were given. These are the main angles that I want you to memorize but you can always infer in-between angles based on what we have here.

I’m also including a hundred and eighty degrees in this trick to remind you that if you pass the ninety degree mark, you’re going to the negative x territory which means all the values will be the same except that a Cosx  of a hundred and eighty will be on in the opposite direction or negative one and Syn of course will still be zero. Let’s apply this to a problem that may show up on your MCAT.

A child pulls on a 4kg wgon with a gorce of 9N. Find the initial acceleration of the wagon if the force is applied at 30˚ to the ground.

The physics portion to this question will be tackled in the Physics videos found at leah4sci.com/MCATPhysics. But because I wan to focus on Math, I’ll jump straight into the equation. If we have Force equals to Mass times Acceleration (F=ma) and we wanna solve for acceleration, we divide by mass, divide by mass giving me the Formula Acceleration is equal to Force over Mass (a=F/m).

But we can’t use the total force we can only use the force apply to the direction of motion. I’ll simplify the wagon as rectangle, here we have the child pulling on the wagon with an angle of thirty degrees to the ground. If the force of Nine Newton is applied thirty degrees, we only want the component in the x-direction since the acceleration will be in the X-direction. That means we have to take the initial force and break it into its X and Y components to know what to use in the situation.

Force in the x direction equals force times the Cos of thirty degrees. How did I know to use Cos, remember the trick we’re spelling Cos with an x reminding us that the standard triangle uses Cos for the X-value. Cosx of thirty according to our shortcut is point nine, we’re not gonna use point eight six six because in Math will take too long. So we have nine newtons times Cosx of thirty which is zero point nine.

Be sure to join me in the next video where I show you how to solve logs without a calculator as it’ll show up in pH, pKa and similar type questions.

Are you overwhelmed by the sheer volume of information required for the MCAT? Are you worried that lack of a proper study plan and low MCAT score will prevent you from getting into Medical School? My new ebook The MCAT Exam Strategy is 6-Week Guide to Crushing the MCAT will help you formulate a concrete study plan by helping you figure out where you stand now, identify your goals and figure out what it takes to reach them and it’s yours FREE when you sign up for my email newsletter at MCATExamStrategy.com By signing up for my email newsletter, you’ll also be the first to know when I have new videos, MCAT Study Guide Cheat Sheets Tips and so much more! The link again MCATExamStrategy.com

While the pre-2015 MCAT only tests you on science and verbal, you are still required to perform … END_OF_DOCUMENT_TOKEN_TO_BE_REPLACED

Keto Enol Tautomerization or KET, is an organic chemistry reaction in which ketone and enol … END_OF_DOCUMENT_TOKEN_TO_BE_REPLACED