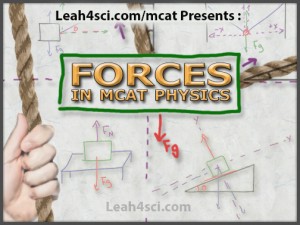 When it comes to forces in MCAT physics, you have to do more than simply memorize a bunch of equations. You need to set your goal on logic and understanding, being able to derive one force equation from another, AND being able to connect force equations to other MCAT topics including kinematics, work, energy and more.

As an MCAT tutor, I find that, when students master this in forces, they have an easier time connecting other topics.

My goal with this video series is to help you make sense of Newton's Laws and all the wacky force equations.

For extra guidance as you study these videos, be sure to download my MCAT Forces Cheat Sheet.

This series requires a foundation in non-calculator math and kinematics. For a quick refresher, be sure to watch my MCAT Math Without A Calculator video series and my MCAT Kinematics video series. 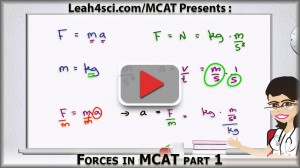 Every video series needs an introduction, and Forces in MCAT Physics is no different.

This video introduces forces along with the proper way to derive units and ‘memorize' equations.

This video also shows you how to relate the kinematic equations to forces to ensure you don't mentally isolate the different topics. 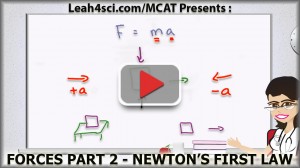 Newton's First Law is more than just an explanation of inertia.

For the MCAT you will be required to UNDERSTAND and apply inertia concepts to bigger picture questions and passages.

This includes understanding inertia for objects at rest or in motion, and objects in motion changing their direction. 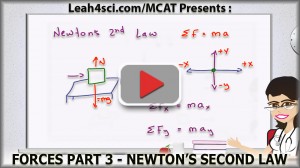 Newton's Second Law talks about how the sum of forces results in an acceleration.

This video breaks down the F=ma concept by looking at the sum in the x direction, y direction, and some component between the 2 axis. 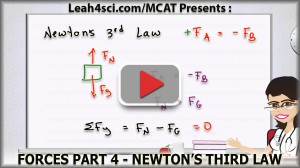 Newton's third law of motion is potentially the most difficult to grasp. Fa = -Fb.

This video breaks it down to help you understand how a force can ‘magically' change to balance a counter-force. 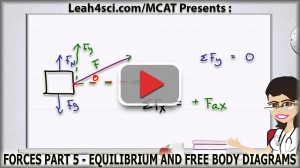 When it comes to static or dynamic equilibrium, it's important that you understand how to visualize forces in every direction.

This video shows you how to set up free body diagrams and then to set up a simplified equation to help you minimize time wasted on potentially complex MCAT questions.

This video explains the concept of Normal Force and shows you how to apply it to MCAT-style questions when objects are resting on horizontal surfaces, under a surface, and even on an inclined plane. 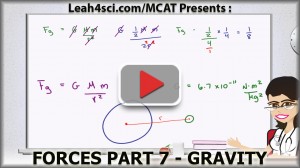 We tend to take the force of gravity for granted and, on the MCAT, you might see questions that ask you to calculate the gravitational pull on an object under very specific circumstances.

This video will show you how to calculate the force of gravity for objects near the surface of earth AND for objects far from earth, using both the simple and complex equations for gravity.

While the pre-2015 MCAT only tests you on science and verbal, you are still required to perform … END_OF_DOCUMENT_TOKEN_TO_BE_REPLACED

Keto Enol Tautomerization or KET, is an organic chemistry reaction in which ketone and enol … END_OF_DOCUMENT_TOKEN_TO_BE_REPLACED