Keto Enol Tautomerization or KET, is an organic chemistry reaction in which ketone and enol molecules can isomerize or interconvert, typically in an acid or base catalyzed reaction.

Keto Enol Tautomerization will show up quite a few times in your organic chemistry course, starting with alkyne hydration reactions, and popping up again in your advanced (orgo 2) enolate and condensation reactions.

Let’s take a step back to discuss vocabulary before diving into reaction specifics.

Tautomerization is a very specific type of isomerization,
in this case the interconversion between the keto and enol forms of a molecule. 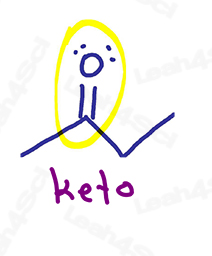 Keto refers to the ketone functional group – though KET is not limited to JUST ketones.
Aldehydes, which are very similar to ketones,
except for a terminal hydrogen,
can also undergo tautomerization.

Enol comes from ‘Ene’ as in alkene,
a carbon to carbon double bond.
And ‘ol’ as in alcohol – an OH group.

If tautomerization is like isomerization,
Think of tautomers as isomers, specifically constitutional isomers.

The term Tautomers refers to the two specific forms of the molecule that can interconvert at equilibrium.
In KET, the Keto and Enol forms are tautomers of each other.

Which is More Stable, Keto Or Enol?

Despite being a reversible reaction, the keto form is more stable and thus favored by equilibrium.

Fortunately, this math is from thermodynamics covered back in general chemistry and something you don’t have to calculate at the organic chemistry level (some professors still require it though).

This is not a hard and fast rule.
There are some situations where the enol form will provide greater stability to the overall molecule. Take a look at the example below:

The keto form has a more stable carbonyl, but the enol form allows the pi bond to be part of a much more stable aromatic system (review aromaticity here). Therefore, the enol form of this molecule will predominate at equilibrium.

Keto Enol Tautomerization will come up in various organic reactions, starting with oxymercuration and hydroboration of alkynes.

KET in Oxymercuration of Alkynes

As with alkenes, the oxymercuration reaction simply breaks ONE pi bond to add an alcohol to the more substituted carbon, following Markovnikov’s rule.

The resulting molecule still has one pi bond: an alkene on the same carbon as the alcohol.

This is an unstable enol and will automatically undergo keto enol tautomerization to form a more stable ketone final product.

For more on the oxymercuration reaction and mechanism, watch below:

KET in Hydroboration of Alkynes

As with alkenes, hydroboration is an anti-Markovnikov reaction in which a pi bond is broken and an alcohol is added to the less substituted carbon.

In the case of a terminal alkyne, when a single pi bond is turned into an alcohol, the terminal carbon still has a pi bond or alkene, making it an enol.

This molecule will also undergo tautomerization to form a more stable aldehyde product.
Despite forming an aldehyde, this reaction is still considered Keto enol tautomerization.

For these 2 reactions, the resulting ketone or aldehyde is determined by the location of the enol.

Tautomerization can occur in both acid-catalyzed and base-catalyzed conditions.
With the above reactions, consider what the conditions have to be after undergoing hydration as written.

The video below walks you through the step-by-step:

Remember that in acidic aqueous solutions we have lots of water and hydronium (H3O+) available in solution.

Tautomerization begins when the partially negative electrons on the alcohol oxygen reaches down to attack the sp2 carbon atom (the one holding the pi bond).
In forming a second bond between carbon and oxygen, carbon would have a total of 5 bonds.

To avoid violating its octet, carbon will kick out the pi bond between itself and the other sp2 carbon atom pushing the electrons on to the other carbon.

Instead of sitting as a lone pair on carbon, the negative electrons are attracted to the partially positive H+ atom on a nearby hydronium molecule.

Since that H+ atom can only have one bond, it lets go of the electrons holding it to oxygen, allowing water to float away in solution.

The resulting molecule looks like a ketone except for the unstable oxygen atom.

Oxygen, with 2 bonds to carbon, 1 bond to hydrogen, and a single lone pair, has an unstable positive charge.

Another water molecule in solution uses its partially negative electrons to deprotonate the oxygen therefore returning its electrons to form a neutral stable ketone.

Let’s do some quick accounting.
This reaction began when the enol attacked hydronium, our acid catalyst.
In the final step, water deprotonates the ketone, reforming our hydronium acid catalyst.

Reminder: if the enol is terminal the resulting product is an aldehyde instead of a ketone

Reminder: in a basic aqueous solution we have both hydroxide and water floating around.
Never show H+ or hydronium in a basic solution!

This reaction is very similar to the acid-catalyzed mechanism except that deprotonation is the first rather than final step.

This reaction begins when a basic hydroxide in solution reaches for the acidic hydrogen on the enol.
Instead of collapsing back onto oxygen to form a negative oxide, the electrons quickly collapse downward to form a carbonyl pi bond between carbon and oxygen.

As with the acid-catalyzed mechanism, carbon must kick out its current double bond to avoid having 5 bonds and violating its octet.
The pi bond electrons do not sit and wait on the other carbon, instead, they seek out and grab a proton from solution – grabbing it off a water molecule.

In a single series of attacks (one step), we have a ketone as our final product.

Reminder: if the enol is terminal the resulting product is an aldehyde instead of a ketone

While the pre-2015 MCAT only tests you on science and verbal, you are still required to perform … END_OF_DOCUMENT_TOKEN_TO_BE_REPLACED

Keto Enol Tautomerization or KET, is an organic chemistry reaction in which ketone and enol … END_OF_DOCUMENT_TOKEN_TO_BE_REPLACED