A radical, or free radical, refers to an atom or molecule with a single unpaired electron.

This concept differs from 99% of organic chemistry which deals with the movements and reactions of electron pairs.

Before we dive into free radical reactions, let’s take a step back to understand the nature and chemistry of these mysterious and lonely electrons.

What is a Free Radical?

We’ve introduced radicals as ‘free’ or unpaired electrons. But what does this look like, and how does this impact their stability and reactions?

Think back to drawing Lewis Structures. Every electron was represented with a partner, either as a lone pair, a single bond with 2 electrons, or a double/triple bond with 4 or 6 electrons.
But always in pairs, always in even numbers.

Even when they react, the electrons still usually move in pairs.
We see lone pairs of electrons attacking, pi bonds collapsing, even new bonds forming, all in pairs.

Electrons desperately WANT to be paired. Having a partner makes them more stable.
If you manage to take an electron away from its partner, you create one very unhappy, and thus very reactive, radical electron.

Drawing Lewis structures for radicals is not that different from what we covered above.

If paired electrons give us even numbers, unpaired radicals give us odd numbers, which automatically violates the octet rule.

This tells us nothing of their charge however, because radicals are typically uncharged and neutral.

Sometimes, these radicals occur naturally.
Think of the group 1A metals like Sodium and Lithium.
Since they only have 1 s electron in their valence shell, they are naturally considered radicals.

But metals are stable, you say?
Actually… not so much. Take a look at the dissolving metal reduction (alkyne to trans-alkene) to see just how easily they want to give up their electrons.

New radicals are created as a result of extreme conditions such as heat, light, or strong chemical exposure. This is something we’ll look at in more detail in the reaction videos below.

Happy, stable molecules like to exist in their lowest possible energy state.
Radicals, not so much!

Most of the atoms/molecules we see in organic chemistry have their bonds in hybrid orbitals, such as sp3, sp2 and sp.
Radicals, being well, radical, don’t want to play this game.
They insist on existing in a half empty, higher energy unhybridized p-orbital.

Take the very unstable methyl radical – CH3.
The central carbon atom has a total of 4 valence electrons.
3 of these electrons, each bound to a hydrogen atom, exist in a stable hybridized sp2 orbital.
As I teach in this Hybridization Tutorial, the sp2 configuration makes carbon trigonal planar with a bond angle of 120°.

The radical, however, sits in the p orbital that is above and below the plane of this trigonal planar ‘flat’ molecule.

This is just one of the many similarities that we’ll see between radicals and carbocations.

Forget everything you know about drawing arrows in organic chemistry mechanisms. Since radicals deal with just a single electron, we must use a very different arrow system to show how these radical reactions occur.

I like to think of the standard 2-headed mechanism arrow as having one electron on each ‘hook’.

Since radicals deal with a single electron, their arrow should only have a single ‘hook’.

This idea is explained in more detail in the Initiation, Propagation, Termination video below.

When discussing radical stability, we’re simply referring to the range of more/less stable structures within an already unstable scale.

Like the carbocation, radicals are stabilized by neighboring carbon groups. The more carbon neighbors, meaning the higher the degree of substitution, the more stable the radical.

While I don’t have a video on radical stability, given that it follows the same pattern as carbocation stability, I recommend reviewing Carbocation Stability and Ranking to better understand WHY radicals (like carbocations) prefer a higher degree of substitution.

Another way to stabilize radicals is through conjugation or resonance.

If radicals are unstable and carrying a radical is a burden, it makes sense to assume that sharing said radical burden via resonance will help stabilize the overall structure.

Let’s start with a review on drawing allylic and benzylic radical resonance structures.

Using this logic, what would be THE most stable radical?

How about tri-substituted, maximally resonating unpaired electrons like this monstrous triphenylmethyl radical below?
Can you see why? 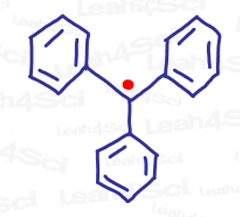 Now that we’ve discussed the what and why, let’s take a look at some of the common radical reactions you’ll come across in undergraduate level organic chemistry.

If you’re preparing for an exam like the MCAT, PCAT, DAT or similar, you are required to know the basics of radical reactions (video 1 below) but may not need the specifics of, say, alkene radical halogenation (video 2 below).

Most organic chemistry reactions follow a simple pattern of ‘nucleophile attacks electrophile’.
Since radicals are, well, radical, they follow their own chain reaction system.

The 3 main steps of a radical reaction are as follows:

Quick note about these reactions:
While these are the 3 common steps, from initiation to termination, most radical reactions will NOT follow this sequence as 1 -> 2 -> 3.

This is explained in more detail in the video below.

When studying alkene reactions, you learn the standard Alkene Halogenation, an electrophilic addition reaction that follows Markovnikov’s Rule, not realizing this is sometimes called the ‘dark’ reaction.

This is in contrast with the Radical Halogenation of Alkenes, an intense reaction that often uses light (or heat or peroxides) as a catalyst or trigger.

The other major difference is that, while the dark reaction follows Markovnikov’s rule,
The radical ‘light’ reaction yields an anti-Markovnikov product.

I challenge you to draw out both mechanisms side by side and compare their intermediates.

What do I mean? This video below explains the entire radical halogenation reaction and then walks you through the step-by-step mechanism.

So far, we’ve discussed the 3 steps of a radical reaction (Initiation, Propagation, Termination) and the Anti-Markovnikov Radical Halogenation of Alkenes.

These are the 2 most common radical reactions you’ll come across at the undergraduate level, but by no means the only ones.

Once you master the basics, you may see additional reactions such as allylic/benzylic halogenation, the use of radical ‘babysitters’ like NBS, and even the advanced radical polymerization reactions.

I cover these reactions, along with so much more on radicals (including practice), in the Organic Chemistry Study Hall.

While the pre-2015 MCAT only tests you on science and verbal, you are still required to perform … END_OF_DOCUMENT_TOKEN_TO_BE_REPLACED

Keto Enol Tautomerization or KET, is an organic chemistry reaction in which ketone and enol … END_OF_DOCUMENT_TOKEN_TO_BE_REPLACED