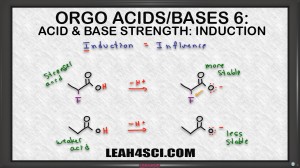 If you prefer to watch it, see the video HERE, or catch the entire Acids and Bases series HERE

Leah here from leah4sci.com and in this video we'll continue our Organic Chemistry Acid Base discussion by looking at the effects of induction on acid strength.

You can find my entire Acid/Base series along with my practice quiz and cheat sheets by visiting my website leah4ci.com/AcidBase. 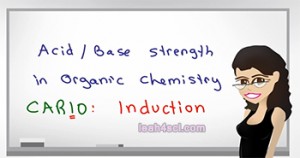 Say you're asked to compare the following molecules and determine which one is the stronger acid. So you pull out your Mnemonics of CARIO and start to compare. They both have the same charge, they're neutral. If we deprotonate, they're both going to be negative 1. The atom holding the acidic Hydrogen is Oxygen on both molecules, they both have same exact resonance so how do you figure out which one is the stronger acid? You look at what else you have in the molecule. In this case, the molecule on the right is a prophanolic acid or simply a carboxylic acid. The molecule on the left is a prophanolic acid but it has a chlorine atom very close to the carboxyl group. 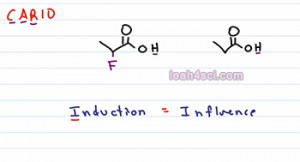 This is where you have to look at induction. Now induction is potentially the most difficult of the acid base comparison concepts to visualize coz it's less intuitive. So I want you to think of Induction as influence.For an acid to form a stable conjugate base it has to be stable with that negative charge, it has to like that negative charge. If you have an electronegative atom very close to where that conjugate negative charge is going to form, that electronegative atom is going to influence the molecule to form a negative charge because it wants that negativity. And ones we have that negativity, it's almost as if it pull on the negative electron towards itself, making the atom holding the charge carry less of the burden. So this is different than resonance where there is actual sharing of electrons instead it's more an influence to calm down that molecule to make it stable.

So let's take a look at the reaction for these two molecules. We show the acidic hydrogen in red and then we show deprotonating. So we're pulling that acidic hydrogen with the positive charge to get a negative conjugate base. We already know we have a negative hydrogen with resonance, the difference here is that the first molecule has a fluorine and that fluorine sort of pulls on the electrons, it doesn't actually move them but the electronegativity influences the Oxygen to be happier with that negative charge and therefore makes it more stable. That means the the conjugate base of the first molecule is more stable, it's happier to hold the negative charge due to the influence of the electronegative neighbor, making the acid that it comes from the stronger acid. 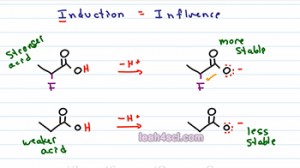 When it comes to the inductive effect you wanna look at two different factors. The first one is the electronegativity. For example, if I put a Bromine on the first molecule and a chlorine on the second molecule, they're both electrogenative halogens but since one is more electronegative that the other, the one that is more electronegative is going to have a stronger inductive effect making that acid a stronger acid. Remember the halogens show up in group 7 in the periodic table and you have fluorine, then chlorine, bromine and iodine. And electronegativity increases up on towards the right, in this case it increases straight up. That means Fluorine is the most electronegative and then chlorine, then bromine and iodine. That means the one with the chlorine is the stronger acid and the one with the bromine is the weaker acid when you compare the two. 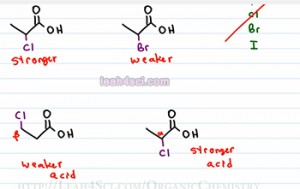 The second that you want to compare is the proximity to the acidic group. If you have an atom capable of influencing the acidity but it's miles and miles away, it's not going to have any effect. Typically you wanna look for atoms that are within one to two carbons away from your acid group. So for example, if we use the Chlorine again, for the first one we put the chlorine on the alpha carbon or one way from the carboxylic acid. For the second we put it in the beta carbon or two away from the carboxylic acid. We have the same electronegative atom but because the one on the right is closer it's going to be the stronger acid because the effect is felt much more strongly by the carboxylic acid. The molecule on the left has the Chlorine farther away, the inductive effect is diminished and that's going to be the weaker acid.

Don't worry about comparing about proximity of one halogen to a distant second halogen because your professors are likely to test you just on comparing proximity or just on comparing the halogens and hopefully not both at the same time. But it's not just halogens that can have an inductive effect on acetic molecules. Let's take a look at a simple carboxylic acid, acetic acid or ethanolic acid and compare that to something like benzoic acid which is a benzene ring attached to a carboxylic acid. If we look at the Mnemonics CARIO, ones again they have the same charge and when we deprotonate, same charge. Atom, Oxygen atom is holding the acidic hydrogen so the ngative will be form on the Oxygen atom. Resonance here is a little tricky, they both have a carboxylic acid, which means that if we deprotonate and move that hydrogen we'll be able to resonate onto the carbonyl carbon and that's it.

A common mistake for students here is to try to push the resonance onto the benzene ring but you can't have the carbonyl going on to benzene. You can have benzene resonating towards the carbonyl but you're not gonna show that for this kind of molecule which brings us to the inductive effect. If you compare the atoms directly attached to the carboxyl group, we have a methyl or a CH3 on ethanoic acid and entire benzene ring on benzoic acid. Carbon is less electronegative compared to atoms like Nitrogen or Oxygen but it's still considered somewhat electronegative, just think about how carbons can stabilize a carbocation, how did they stabilize it, by donating some negativity. That means that if we have a single carbon, it's going to have less of an influence compared to an entire benzene ring with all extra resonating electrons. So benzoic acid, because it has that stronger inductive effect is the stronger acid and acetic acid is the weaker acid.

It's not by much, the pKa for both these molecules is between 4 and 5 but the benzene ring does make enough of a difference to make a stronger acid.

Be sure to join me in the next video where we discuss how orbitals will impact the strength of acidity.

Are you struggling with Organic Chemistry? Are you looking for resources and information to guide you through the course and help you succeed? If so, then I have a deal for you, a FREE copy of my eBook “10 Secrets to Acing Organic Chemistry”. Use the link below or visit orgosecrets.com to grab your free copy. After downloading your free copy of my eBook, you’ll begin receiving my exclusive email updates with Cheat Sheets, reaction guides, study tips and so much more. You’ll also be the first to know when I have a new video or live review coming up.

If you enjoyed this video, please click the thumbs up and share it with your Organic Chemistry friends and classmates. I will be uploading many videos over the course of the semester so if you haven’t subscribed to my channel yet, do so right now to be sure that you don’t miss out.

While the pre-2015 MCAT only tests you on science and verbal, you are still required to perform … END_OF_DOCUMENT_TOKEN_TO_BE_REPLACED

Keto Enol Tautomerization or KET, is an organic chemistry reaction in which ketone and enol … END_OF_DOCUMENT_TOKEN_TO_BE_REPLACED