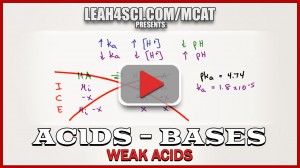 Below is the written transcript of my YouTube tutorial video Ka and pH shortcut for Weak Acids in MCAT Chemistry.

If you prefer to watch it, see Video HERE, or catch the entire MCAT Acid Base Series

Leah here from leah4sci.com/mcat and in this video we'll take a look at the calculations for weak acids as it'll show up on your MCAT. You can find this entire series along with the practice quiz and cheat sheet by visiting my website leah4sci.com/MCATAcidBase.

Recall that a strong acid is something that will dissociate one hundred percent when placed into solution. For example HCl placed in water will completely break apart to give you H+ and Cl minus. A weak acid on the other hand doesn't dissociate completely but instead you'll have an equilibrium between the reactants and the product. For example, if we look at acetic acid which is HCH3CO2 and we placed it into water, we have to show this reaction with an equilibrium back and forth arrow because some of the acetic acid will dissociate to give us H+ and CH3CO2- but when you have the acetate forming, some of the acetate will attack the H+ and will reform the acetic acid in solution. So instead of a one way arrow to show that everything dissociates we have a two way arrow to show that there is some equilibrium between the two. Now this is very important for the MCAT because you have to do different calculations based on this equilibrium. So think about how you set up the expression for any equilibrium reaction. You have the concentration of products divided by the concentration of reactants. For this reaction let's first simplify, acetic acid is a proton which I'll write as H bound to an acetate which we'll call A. It breaks up to give me a proton and then acetate which is negative which we'll represent as A minus.

For the concentration of products, we have H+ and A-, and for the concentration of reactants we have HA and so the equilibrium expression for an acid dissociation if you call that acid HA regardless of the acid, is going to be written as the concentration of H+, A- , or HA. If it's aqueous, you'll sometimes see it written as H3O+ instead of H+ but it's the same thing, so either one works. Now there is a specific name for this type of dissociation and that is the kaQ, the equilibrium constant of acid dissociation. So think of ka as the kaQ of a, the acid dissociation constant. You have to both know this equation and understand this equation for the MCAT. What do I mean by understand this equation? The MCAT loves ratios and comparisons, so what does this tell you, well the ka is a good indicator for the strength of the acid and when we say strong or weak in the context of a ka, we mean a strong acid within the weak acids or a weak acid with a weak acids because a proper or true strong acid has a 100 percent dissociation and no ka or a ka of infinity. If we discount the concentrations of the acid and conjugate base but instead just look at the H+, you'll notice that ka is proportional to the H+ concentration. And what this tells you is that if you have a high ka that means you're going to have a high H+ concentration. Now recall that pH is equal to negative log pH concentration and that the negative log will flip the relationship so that if you have a high H+ concentration you're going to have a low pH. The lower the pH the stronger the acid so a high ka is a strong acid which means that if we have a low ka, we'll have proportionally low H+ concentration which means we're going to get a high pH and therefore a weak acid or potentially a good base depending on how high that pH is.

Now if you have to do calculations for example to find the H+ concentration or the pH. In GenChem you learned how to setup a ICE chart for the reaction.We started out by writing the reaction and then you have ice for the initial change and equilibrium. And then you wrote your molarity initial, we put zeros for a non dissociated acid minus x for the change plus x plus x and then after all of that we have molarity initial minus X, X and X. Now this ICE chart is great for GenChem but if you find yourself doing this on the MCAT you are wasting your time. I'm going to show you a shortcut but first let's see why that shortcut works. For a weak acid dissociating, you only expect a very small amount of that acid to break apart. For example acetic acid has a pka of 4.74 and the ka that is equal to 1.8 times ten to the minus five. Now think back to what that ka tells you. If ka is the ratio of H+, A- over HA and we have a number on the order of ten to the minus five that means we have a very small number which comes from having a very low numerator and a very high denominator. When you divide a small number over a big number, you get something on the order of ten to the minus five or smaller. Now if the acid breaks up to give us H+ and A- meaning it's giving off x and the ka is such a small number, that tells you that the amount of X coming off is really really small. If you have an initial molarity that is from three powers or more greater than the ka, so for example, if we start with the initial concentration of zero point one that's one times ten to the minus one. Ten to the minus five is more than three powers away. More than three powers smaller, that value of x is negligible. It's like saying I have the number one and then I'm subtracting zero point zero zero one. If I work this out, I get an answer of 0.9999. On the MCAT close enough is good enough so we want to round and what does this round to? one. That means that the amount that we subtracted was so tiny, it's negligible and it doesn't change it.

Find the pH of a 0.0009 molar solution of acetic acid given that the ka is 1.8 times 10 to the minus 5. The first thing you want to recognize is that fact you're given a ka tells you that it's a weak acid and it tells you there will be an equilibrium in solution and not a 100 percent dissociation.To find the pH we have to recognize that it equals the negative log of the H+ concentration so that's the first thing we need to find. But for the weak acid we have to setup the expression. If ka is equal to x squared over molarity initial where x squared is equal to the H+ concentration, we have to isolate X. Multiply both sides by molarity initial which gives me that molarity initial times ka is equal to x squared and then take the square root of both sides. Now let's solve for x. So we know that x is equal to the square root of the molarity initial times the ka where the molarity initial is 0.0009 and the ka is 1.8 times 10 to the minus 5, which is great! but how do you solve this without a calculator?

So we'll have to use some of the Math tricks which I teach in my Math Series. The first one we wanna do is to simplify this. I want to round this 9 to a 10 which gives me 0.001 and I'll round the 1.8 up to a 2. Now I want to combine my scientific notations. If I move the decimal one, two, three spaces to the right that means I'm multiplied by a thousand, I have to divide this one by a thousand or decrease it by three powers which gives me negative 8. And that means X is equal to the square root of 1 we'll just drop it out. 2 times 10 to the minus 8. Now this is so much easier to do. We can split this up as two times one times ten to the minus eight and the square root of two is a number you should have memorized as 1.4 taking the square root of 10 to an even power just divide that power by two. Ten to the minus four. And that means x which is equal to the H+ concentration is equal to 1.4 times ten to the minus 4. Just to show you how close we are, when punching the initial numbers into the calculator I got 1.27 times 10 to the minus 4. How close is 1.4? But we're not done! We now have to do pH is equal to negative log pH+ concentration which is 1.4×10 to the minus 4. Again we're going to round 1.4 down to 1 and the pH is approximately 4. In fact punching this number to the calculator, I've got a pH which is equal to 3.896, talk about close!

Be sure to join me in the next video where we look at how to do calculations for weak bases. And you can find that along with the mentioned links, the rest of this series, practice quiz and cheat sheet by visiting my website leah4sci.com/MCATAcidBase.

Are you overwhelmed by the sheer volume of information required for the MCAT? Are you worried that lack of a proper study plan and low MCAT score will prevent you from getting into Medical School? My new eBook The MCAT Exam Strategy is 6-Week Guide to Crushing the MCAT will help you formulate a concrete study plan by helping you figure out where you stand now, identify your goals and figure out what it takes to reach them and it’s yours FREE when you sign up for my email newsletter at MCATExamStrategy.com. By signing up for my email newsletter, you’ll also be the first to know when I have new videos, MCAT Study Guide Cheat Sheets Tips and so much more. The link again MCATExamStrategy.com.

While the pre-2015 MCAT only tests you on science and verbal, you are still required to perform … END_OF_DOCUMENT_TOKEN_TO_BE_REPLACED

Keto Enol Tautomerization or KET, is an organic chemistry reaction in which ketone and enol … END_OF_DOCUMENT_TOKEN_TO_BE_REPLACED