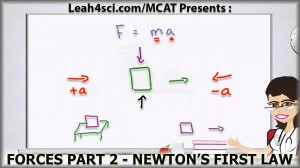 If you prefer to watch it, see the video HERE, or catch the entire MCAT Physics Forces series HERE

Leah here from leah4sci.com/MCAT and in this video we’ll talk about Newton’s first law of motion as its required for the MCAT. You can find my entire series of MCAT Forces along with my forces cheat sheets and practice quiz by visiting my website at leah4sci.com/forces.

On the MCAT you are required to know Newton’s three laws but you don’t want to just memorize them, you want to make sure that you really understand them. 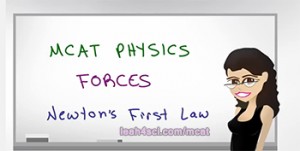 Newton’s first law tells you that an object experiencing constant velocity will maintain the velocity and direction unless acted upon by an outside force. But that’s too many words to memorize so instead, think of it as an object in motion will stay in motion at that course and an object at rest will stay at rest. Unless acted by an outside force which is equal to ma where m is the object and a is the acceleration that you’re applying to that object in a different direction. So for example, if I have a block and it’s moving to the right at some constant velocity and I apply a force from the right I’ll accelerate the object making it go even faster to the right. On the other hand if I have the same object moving to the right and I apply negative acceleration, meaning acceleration opposite to the motion of the block then the block slow it down until it come to a complete stop. Remember in Physics, positive and negative are used to denote direction so a positive acceleration would be to the right or in the direction of motion. A negative acceleration means to the left or opposite the direction of motion.

Now what happens if I apply a downward force to a block moving at the right. That downward force will not change the velocity because it’s not acting on the same axis as the motion. So your next question should be “Okay, if I’m pushing down shouldn’t I accelerate the object downward?”, No! because remember we have a normal force acting upward an equilibrium in the y-direction which is something we’ll talk about in the next video. That’s the concept, now let’s see the mathematical equation. 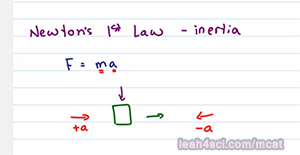 An object will experience a constant velocity unless acted upon by an outside force implies that when an object experiences that constant velocity it has no net force. So if Force is equals to ma then this has to equal to zero and if the mass is not zero we know acceleration is zero. 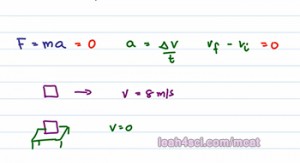 There are three scenarios that we want to look at. The first is an object in motion; let's say I have a block moving to the right with a velocity constant of eight meters per second that means it's moving at eight meters every second, second in second out until something stops it. Now you might ask, but if I push something won't it eventually come to a stop? and you're right, we have opposing forces like friction which qualify as an external force but imagine that there's no friction, this object will keep going indefinitely.

Now let's take a look at another scenario. Let's say I have an air hockey table where the air coming out off the table is opposing friction so we can pretend there are no opposing forces such as friction acting on the hockey puck that is sitting on the table. If the puck is moving in one direction at a constant velocity and then something happened to make the puck change its direction, even if the puck is still moving at the same constant velocity it experienced the force because the velocity in the x-direction is no longer the same even though the total velocity is the same because now we have some component in the x-direction that is smaller and some component of velocity in the y-direction. So even though the overall velocity is the same, we're looking specifically at a velocity and direction that we started with. And this is something critical that you have to keep in mind especially when we talk about centripetal motion for an object rotating at a constant circular velocity. 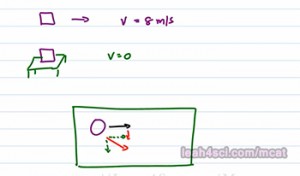 Be sure to join me in the next video where we talk about Newton's second law and you can find this video along with my entire series, forces cheat sheet and practice quiz by visiting my website leah4sci.com/forces.

Are you overwhelmed by the sheer volume of information required for the MCAT? Are you worried that lack of a proper study plan and low MCAT score will prevent you from getting into Medical School? My new eBook The MCAT Exam Strategy A 6-Week Guide to Crushing the MCAT will help you formulate a concrete study plan by helping you figure out where you stand now, identify your goals and figure out what it takes to reach them and it’s yours FREE when you sign up for my email newsletter at McatExamStrategy.com. By signing up for my email newsletter, you’ll also be the first to know when I have new videos, MCAT Study Guide Cheat Sheets, Tips and so much more! The link again MCATExamStrategy.com.

While the pre-2015 MCAT only tests you on science and verbal, you are still required to perform … END_OF_DOCUMENT_TOKEN_TO_BE_REPLACED

Keto Enol Tautomerization or KET, is an organic chemistry reaction in which ketone and enol … END_OF_DOCUMENT_TOKEN_TO_BE_REPLACED