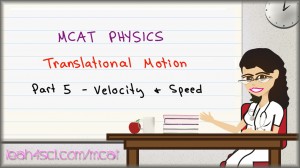 On the MCAT, Speed and Velocity maybe used to represent the same concept but there is a difference and it’s important that you understand. In the previous video how speed is Scalar meaning it has only a magnitude but velocity is a Vector given that it has a magnitude and direction.

As an example I can say I ran five miles per hour, that’s my speed or I ran five mile per hour Northwest, given that I have the direction that makes it a Velocity. The formula for speed and velocity are very similar but they actually mean something completely different. We’ll use S for speed and speed is equal to distance over time (S=distance/time). Velocity is a Vector and in Physics you were taught that an arrow over the V on the MCAT we’ll just assume that we know it’s a Vector and the formula is displacement over time (V=displacement/time) which we’ll see written as delta x over delta t. 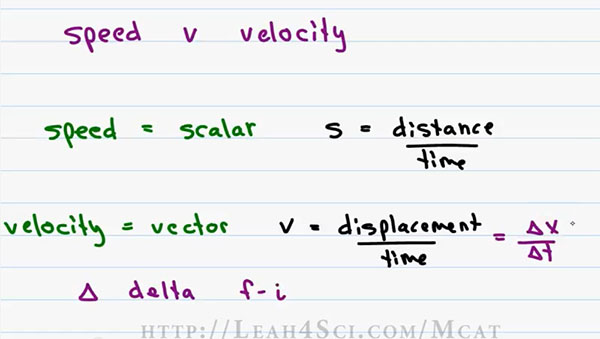 And since Velocity is a Vector, Velocity will be in the direction of the displacement. Depending on what you’re using as a study guide, you may see the formula written in very different ways but don’t let it throw you off. As you’re studying instead of just memorizing make sure you’re comfortable with the units and comfortable manipulating them so that you can solve for equation in any format.

So let’s play with this a little more. We’ll change our delta t to be just the time, we wanna keep delta x instead of just x because you may start from a non-zero starting point so you’ll have to use your X initial and X final. We have V instead of delta V because we’re assuming that we have a constant average Velocity. If you have to find the average between A and B, you simple write A plus B over two (A+B/2) and that’s your average.

For the average velocity, we have V1 plus V2 over 2 (V1+V2/2) and that’ll give us the average or simply V as we use it in the expression. But now let’s say you’re asked to solve for X. Anytime you’re told just X, assume it’s your X final. The first thing we want to do is rewrite or understand the equation in a format that gives us X. And that’ll give us the following: V is equal to X final minus X initial over t and then we’ll solve for X final algebraically.

First thing we want to do following PEMDAS remember you have parenthesis exponents multiplication, division, addition and subtraction. We’re dividing by t so we wanna move that to the other side by multiplying both sides by t. Let’s rewrite it so it’s clear, Vt is equal to X final minus X initial (Vt=Xf – Xi). We have minus X initial so we wanna bring that to the other side cross X initial on both sides and that gives us our final equation for X final or simply X is equal to X initial plus Vt (X=Xi+Vt). 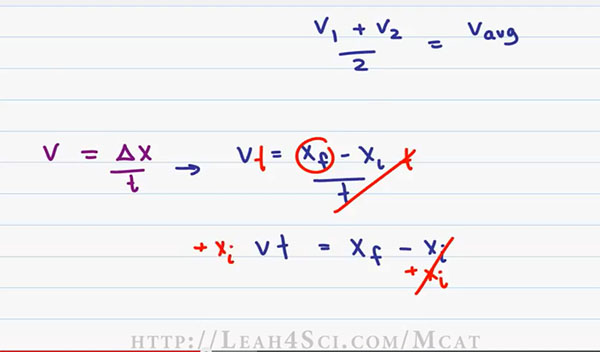 This is the format that I learned in Physics and the one I’m most comfortable with. If X initial is zero then your formula is simply equal to X is equal to Vt where V is the average or the constant velocity.

Let’s try this once more solving for time. The first thing we have to do is get time out of the denominator because you need to have your unknown as a stand alone unit. So we bring it up to the numerator once again multiplying both sides by t but this time we divide both sides by V to isolate t. This gives us t by itself is equal to delta x divided by V.

For a complete list of MCAT Kinematic Equations including my guide for how to know which formula to use and when, visit my website https://leah4sci.com/MCATPHYSICS, look for the Cheat Sheet under Translational Motion.

Let’s end with the practice question:

Find the speed and velocity if a girl walks 1.4 miles in 20 minutes to reach a friend’s house. The homes are exactly 0.7 miles apart.

The reason there are two distances given is because if the two home are exactly 0.7 miles, it doesn’t mean that you only walk point seven miles to get there. Say there are streets, avenues or general obstacles in the way, you may find yourself taking a path that looks like this for a total of 1.4 miles even though the map says 0.7 miles. 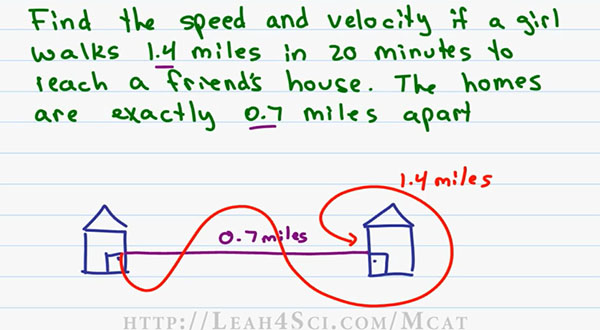 This is where you get to see the clear distinction between speed and velocity. Remember the formula for speed is actual distance over time (S=d/t). The actual distance walked is 1.4 miles and the time is 20 minutes. So let’s solve in miles per minute.

We have one point four over twenty. If we try to do long division, on the MCAT it takes too long. Instead we’ll use the trick of multiplying the top and bottom by ten moving the decimal one space to the right, this gives us fourteen over two hundred.

If you’re not comfortable with this trick, go back to my Math Series on my website https://leah4sci.com/MCATMATH.

If I have two zeros, I divide by moving the decimal two spaces back and that gives me 0.07 miles per minute. This is the Speed. Now let’s look for the Velocity. Remember that Velocity is equal to Delta X over t where the total displacement. Eventhough the girl walked 1.4 miles, the actual displacement or as the crow flies is just .7 miles. And so this equation is written out as .7 miles over 20 minutes. Now the delta x would be x final minus x initial. X final is 0.7, X initial is 0 which is why we used just 0.7. 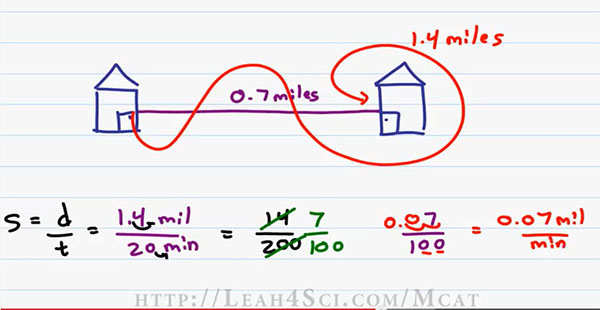 If we didn’t start out at zero we would have a different delta x value so definitely keep that in mind. One more time, we’ll move the decimal to the right for the top and bottom to get rid of that decimal, this gives me seven over two hundred. Again, something that would take too long to calculate by long division, so we can try two different tricks.

This trick usually saves time, here I found it to be a little too long, so we’ll try another trick. If we look at seven over two hundred, ideally any number divided by a hundred is very easy to memorize because we have one followed by zeros. To get two hundred to one hundred, we have to divide by two and so we divide seven by two as well. This is not as simple but if you think about it, half of seven is three point five, half if six is three and we have one left over, half of one is a half and that gives us our three point five. 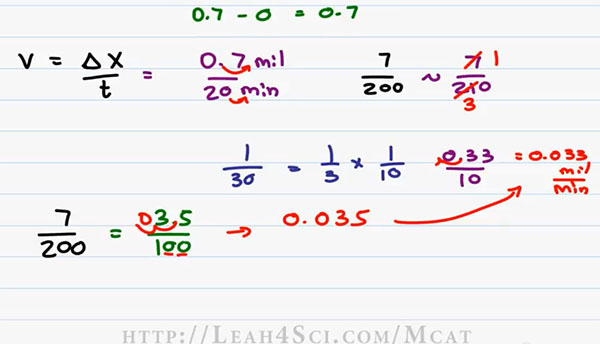 Three point five over one hundred is much easier to work with, we’re dividing by a factor of ten with two zeros. We move the decimal back two spaces and that gives us zero point zero three five (0.035) which is very close to 0.33. Use whichever trick feels more natural to you but whatever you do, DO NOT resort to long division, it’s gonna take too much time.

Be sure to join me in the next Translational Motion video where I talk about acceleration as it relates to the MCAT Kinematics.

Are you overwhelmed by the sheer volume of information required for the MCAT? Are you worried that lack of a proper study plan and low MCAT score will prevent you from getting into Medical School? My new ebook The MCAT Exam Strategy is 6-Week Guide to Crushing the MCAT will help you formulate a concrete study plan by helping you figure out where you stand now, identify your goals and figure out what it takes to reach them and it’s yours FREE when you sign up for my email newsletter at McatExamStrategy.com. By signing up for my email newsletter, you’ll also be the first to know when I have new videos, MCAT Study Guide Cheat Sheets, Tips and so much more! The link again McatExamStrategy.com.

While the pre-2015 MCAT only tests you on science and verbal, you are still required to perform … END_OF_DOCUMENT_TOKEN_TO_BE_REPLACED

Keto Enol Tautomerization or KET, is an organic chemistry reaction in which ketone and enol … END_OF_DOCUMENT_TOKEN_TO_BE_REPLACED