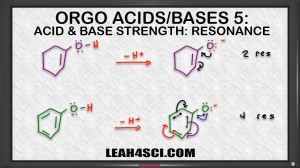 If you prefer to watch it, see the video HERE, or catch the entire Acids and Bases series HERE

Leah here from leah4sci.com and in this video, we'll continue our Organic Chemistry Acid Base discussion by looking at how Resonance impacts the strength of an acid. You can find this entire video series along with my Acid Base practice quiz and cheat sheets by visiting my website, leah4sci.com/AcidBase. 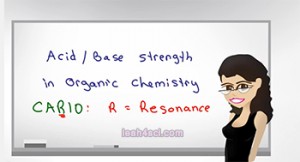 Say you're ask to compare the following molecules to determine which one is more acidic. We're looking at ethanol and ethanoic acid or acetic acid and they pretty much the same structure, both have a two carbon chain and even in OH the only difference is the acetic acid has a carbonyl or double bound oxygen. If we think back to the first two factors we study in the first videos we have charge, they're both the same charge, and if we de-protonate they'll still have the same charge. Then we wanna look at the atom holding the charge or in this case the atom holding the acidic Oxygen, but they're both oxygen.

So we can't use charge or the periodic table trends to compare their strength because so far everything we’ve discussed is exactly the same with the two. So the next thing you want to analyze is to see if the atom has the ability to delocalize or share its charge. But what charge are we talking about? they're both neutral. The first thing we want to do is write out the acid base equation to show what happens when we deprotonate each of these molecules. Notice the acidic Oxygen for both acids is sitting on an Oxygen atom so we deprotonate and see what happens as a result. 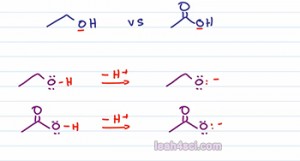 As predicted both of the conjugate bases have a negative one charge, so the same charge and then Oxygen holding the charge, so the same atom. The difference is, the epoxide or conjugate base of ethanol has an Oxygen sitting by itself and then Oxygen is the only atom capable of holding that charge. If you think of charge as a burden then the epoxide has the Oxygen carrying its charge all by itself. There's no atom to help or share that charge. On the other hand,if we look at the acetate which is the conjugate base on acetic acid we have the negative oxygen sitting next to a carbonyl group which means we can have a resonance.

To understand how resonance impact acidity, I'm assuming that you're confident with figuring out and draw resonance structures. If you're not, go back to my Orgo Basics video series and study both the resonance videos in detail to make sure that you get it and you can find it on my website leah4sci.com/OrgoBasics. 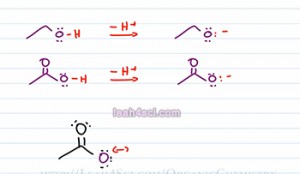 Let's see what happens with the resonance. We have a negative on the purple Oxygen with three lone electron pairs. Next to that we have a carbonyl group which has a partially positive carbonyl carbon and a partially negative carbonyl Oxygen. The negative Oxygen will use one of its electron pairs to move towards the carbonyl carbon creating a pi bond between itself and that carbonyl. But Carbonyl has five bonds which is not allowed so one of the bonds between carbon and the black Oxygen will break and collapse as a lone pair onto that Oxygen atom.

We have the double headed arrow to show the resulting resonance form. Now we see the black Oxygen still has its two lone pair of electrons in addition to the third blue lone pair that used to be the carbonyl carbon. The purple Oxygen still has its initial two lone pair but that's all it has. The red electrons which used to be the third lone pair now sits as a pi bond between itself and the carbonyl carbon.

If we do a quick formal charge, the black Oxygen has 7 minus 6 equals negative, that's where our negative charge wound up and the purple oxygen 6 minus six has no charge. So acetate is capable of resonance, in fact it has a total of two resonance structures. The structure we see here and the structure that puts the negative on the upper Oxygen. So what does that have to do with Acid strength or stability of the conjugate base? Well if charge is a burden and then atom is stuck holding that charge all by itself, it doesn't have the ability to share that burden.

Now look at the two resonance forms of acetate. We have a negative charge sitting on the purple oxygen. We have a negative charge sitting on the black Oxygen and that resonance hybrid, that intermediate really has the pi bond moving between the two atoms and a partial negative on each of the Oxygen. That means in terms of that burden, Oxygen is not carrying it by itself, but it's sharing it with other atoms, it's almost like it's only carrying half a charge. 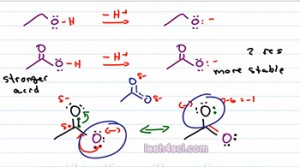 To think of this n the real world, imagine you have something very heavy. Perhaps you can lift it up by yourself, but it' still heavy. And now you have a friend who is approximately the same size and capable of carrying as much as you. If the two of you lift this heavy item together, you're only carrying half of that item and that makes it so much easier because the weight is distributed between the two of you. The resonance here is the same exact thing where the negative charge distributed among multiple resonance forms. Every individual atom is not carrying a full charge and therefore is so much happier with that charge and so much more stable. So the fact that acetate has resonance makes it much more stable. Remember, resonance equals stability. So in this case it's more stable and that means it comes from a stronger acid.

On the other hand, epoxide does not have resonance. It carries the charge by itself and so it's less stable, and if it's less stable, it comes from the weaker acid. Let's look at another example. Now, what if I ask you to compare the acidity of one cyclohexanol vs. phenol which is is benzene and an alcohol attached. We look at the charge, they're neutral right now. We'll look at the atom, Oxygen is holding that acidic hydrogen. But we do see that Oxygen is sitting near a pi bond in both cases. So we assume it's possible to resonate the negative charge, so let's draw it out and analyze the conjugate the determine which one is more stable to help us figure out the stronger and weaker acid. 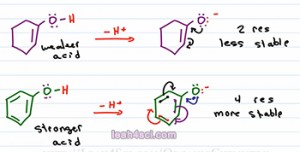 So here's what you want to consider, Oxygen is the more electronegative atom so it's like the stronger person carrying that burden. Carbon is the less electronegative so it's like a weaker person. Now imagine you're carrying something very heavy and you have a weaker friend helping you and together you can lift it. Compare to you're strong and have three weaker friends helping you, which one is going to be easier to carry? When you have one weak friend or three weak friends to help you? Assuming these weak friends are just slightly weaker and still able to help you, having four people carry that heavy item is so much easier compared to two therefore having four resonance structures is going to be so much more stable than just two, making the conjugate base of phenol much more stable and therefore it comes from the stronger acid. Whereas the conjugate base of the one cyclohexanol is less stable and therefore comes from the weaker acid.

If you're not fully comfortable with the resonance, let's actually draw out each structure to make sure you understand what is going on and prove to yourself that the first one puts the negative charge of two different atoms and the second on four different atoms.

We'll start with the conjugate base of one cyclohexanol, we'll take these electrons, move them down, that causes a fifth bound of carbon which is not possible and so these electrons collapse on the carbon. What we'll get here is two pairs of green electrons, a purple pi bond between carbon and oxygen and a lone pair on the carbon, that means the negative charge moved over structure one, structure two.

Now let's do the same thing for the conjugate base of Phenol. We have three pi bonds and a negative charge on the Oxygen to start. We move these electrons causing the first pi bond which we'll show as green electrons to collapse of to carbon, we have two lone pairs on Oxygen, a pi bond between carbon and Oxygen, a green lone pair with a negative charge on carbon atom and two pi bonds that haven't moved yet. The green electrons now move over. We'll show the next pair in blue collapsing on to a carbon atom. We have two red electrons, a pi bond carbon to oxygen, a green pi bond for the electrons that just moved and the blue electrons with a negative charge on this carbon, we have the black pi bond that hasn't moved yet. 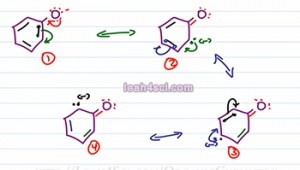 Next we have the blue electrons moving towards the black pi bond causing these electrons to collapse onto carbon. The final resonance structures that has two red lone electrons, a pi bond carbon oxygen, the green pi bond hasn't moved, the blue electrons now form a pi bond to where the black pi bond used to be and the black electrons sit with the negative charge on that upper carbon atom. So here we have structures one, two, three and four. Oxygen is most electronegative so this is most stable resonance and then carbon being less electronegative is slightly less stable but overall a total of four structures is the most stable.

Be sure to join e in the next video where we look at how the Inductive effect helps you understand acid strength. You can find the entire acid base series along with the practice quiz and cheat sheet by visiting my website leah4sci.com/acidbase.

Are you struggling with Organic Chemistry? Are you looking for resources and information to guide you through the course and help you succeed? If so, then I have a deal for you, a FREE copy of my ebook “10 Secrets to Acing Organic Chemistry”. Use the link below or visit orgosecrets.com to grab your free copy. After downloading your free copy of my ebook, you’ll begin receiving my exclusive email updates with Cheat Sheets, reaction guides, study tips and so much more. You’ll also be the first to know when I have a new video or live review coming up.

If you enjoyed this video, please click the thumbs up and share it with your Organic Chemistry friends and classmates. I will be uploading many videos over the course of the semester so if you haven’t subscribed to my channel yet, do so right now to be sure that you don’t miss out.

While the pre-2015 MCAT only tests you on science and verbal, you are still required to perform … END_OF_DOCUMENT_TOKEN_TO_BE_REPLACED

Keto Enol Tautomerization or KET, is an organic chemistry reaction in which ketone and enol … END_OF_DOCUMENT_TOKEN_TO_BE_REPLACED