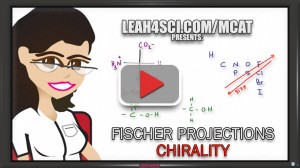 Below is the written transcript of my YouTube tutorial video Fischer Projection Stereochemistry Finding R and S for Single and Multiple Chiral Centers.

Now this video is not in in-depth chirality review but specifically looking at Fischer Projection. So if you're not comfortable with how to find r and s, make sure you review that first and then come back to this video. In video one we look at how to read a Fischer Projection and introduced Mr. Organic Chemistry which helps you remember that the bow tie or the horizontal lines represent groups coming out of the page and the vertical lines represent the vertebrae going back and into the page. You'll also have to be comfortable ranking your atoms for priority to find r and s and while there are over a hundred atoms on the periodic table, when it comes to chirality, I highly recommend memorizing these ten atoms. These are the ten atoms you'll see over and over in your Organic Chemistry course and it helps you remember trends such as electronegativity going up to the right, but more importantly for this, size which goes down to the left.

We're going to rank the atoms in order of highest atomic number and that's the specific atom attached to the chiral carbon and then decreasing. So Iodine will always be your highest then Bromine, then Chlorine, Sulfur, Phosphorus, then Fluorine, Oxygen, Nitrogen, Carbon and finally Hydrogen will always be your lowest priority. 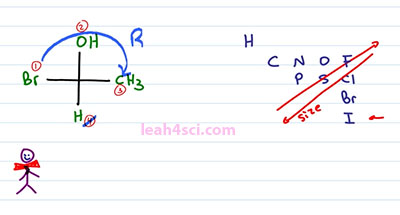 So looking at this Fischer projection, the first thing we want to do is rank our groups. When you see Hydrogen, that's always number 4. Looking at the other atoms we have Bromine as number 1, Oxygen number 2, and Carbon as number 3. We only care about the top three priorities as long as number 4 is into the page or on Fischer Projection up or down. Cancel out number 4, trace the path from one to two to three and since the top of the path goes to the right, that is R. What what happens when your lowest priority isn't going into the page? 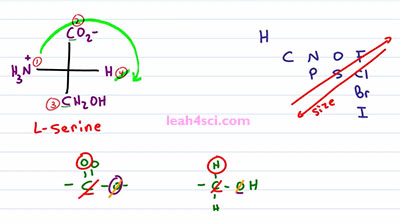 Let's take a look at the Fischer Projection for L-Serine. The first thing we want to do is rank the atoms in order of priority. We recognize Nitrogen to be number one, Hydrogen to be number 4. But then we're faced with a carbon and a carbon so what do we do? I'm gonna break it up to show you but this is something you need to be comfortable doing in your head. The first group we're looking at is a carbon double bound to an Oxygen which you want to envision as two bonds to Oxygen, so I draw out two Oxygen and then another OH, and we're comparing that to a Carbon bound to two Hydrogen atoms and then an OH. We start by comparing the Carbons, they're exactly the same so we cancel that out. Then we look at the next highest priority on the carbon atom. For the carboxylic, I can choose any of the three Oxygen atoms that compare to this Oxygen. once again they're exactly the same, and cancel out. So we go back to the Carbon atom and look for the next highest priority.

For the carboxylic we have an Oxygen, but for the alcohol we have just the Hydrogen. Since Oxygen beats Hydrogen, Carboxylic is going to be priority number 2 and the alcohol will be priority number 3. Now we cross out number 4 and trace the path from one to two to three which looks like it should be R. But the problem is, we're not looking at this correctly because number 4 has to be in the back and here it's in the front. You can do different things here like swap, rotate, or re-draw molecule. But if priority number 4 is directly in the front, just pretend you're looking at this backwards. So if looking at it from the front gives me a clockwise or r-turn, looking at from the back will be exactly the opposite which means I have a counter-clockwise or s-configuration. L-Serine is in the S configuration.

What if you're given an example that has a Fischer Projection with two Chiral carbons, you treat it the same way by looking at one chiral carbon at a time and finding that chirality. So we”ll pick the first chiral carbon and rank the groups in order of priority. Here's a quick guide so that you can follow along. Bromine is priority number 1, Hydrogen is priority number 4, Methyl is 3, that makes this entire group on the bottom, 2. How did I get that so quickly? Whenever you see Hydrogen, it's always, always going to be your absolute lowest priority, make that number4. Whenever you see a Methyl, it is always going to be your second lowest priority if a Hydrogen is present. But if there is no Hydrogen present, it will always be your absolute lowest priority assuming you have no deuterium. So I didn't even have to look at anything else because Hydrogen is the lowest, Methyl is the second lowest atom because it has a carbon bound to the lowest atom hydrogen and so I automatically know that was number 3.

Well let's say I didn't know that, what I would have to do is compare what I see. I have a carbon and that right there is another carbon. They are the same so we have to look at the next highest priority on that atom. For the methyl group we have Hydrogen, but for the lower group we have an Oxygen. Since Oxygen beats Hydrogen, the lower portion of the Fischer Projection outranks the Methyl group which is why the lower portion is two and the Methyl group is three.

While the pre-2015 MCAT only tests you on science and verbal, you are still required to perform … END_OF_DOCUMENT_TOKEN_TO_BE_REPLACED

Keto Enol Tautomerization or KET, is an organic chemistry reaction in which ketone and enol … END_OF_DOCUMENT_TOKEN_TO_BE_REPLACED