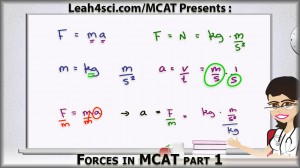 If you prefer to watch it, see the video HERE, or catch the entire Forces in MCAT Physics series HERE

Leah here from leah4sci.com/MCAT and in this video series I’ll give you very detailed foundation on basics that you need to know on Forces on the MCAT. You can find my entire video of series along with my forces cheat sheets and MCAT practice quiz by visiting my website leah4sci.com/Forces. 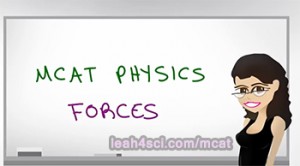 When you think of Forces, the standard equation that comes to mind is F=ma. When we think of Forces, I picture an object that is being pushed or pulled and starts to move or slows down and that directly applies to the equation because the object in question is the mass and causing it speed up or slow down comes from change of acceleration positive or negative and that’s how we get F = ma.

But when the average student studies for the MCAT they memorize instead of understanding equations and then they have trouble applying it to the passages in the MCAT style questions. Instead what you need to do is take every equation not just for forces but every equation and break it down into the units and practice deriving every unit. So let’s apply this to forces.

If you’re not comfortable with Kinematic equations visit my website leah4sci.com/MCATPhysics and find my entire series and cheat sheets on kinematics to make sure that you get the foundation before moving on to the rest of the forces series.

Now let’s take this a step further and see how to connect Forces with Kinematics in this problem.

A force of negative twelve Newtons is applied to a two thousand three hundred fifty grams toy car moving at eight meters per second. How far does it travel before coming to a complete stop?

Let’s take a look at what we have. A force of negative twelve Newtons implies that the force is going opposite the direction of motion so we’re slowing it down and that’s why it comes to a complete stop. We have an initial velocity of eight meters per second and if it comes to a complete stop we have a final velocity of zero meters per second. We’re asked to find how far it travels which means delta x are unknown. We almost have enough information to apply  the kinematic equations except that the twelve newtons doesn’t plugin we have to exact the acceleration.

So with F is equal to ma which is equal to negative twelve newtons we are going to divide both sides by the mass and that will give us acceleration. So acceleration is equal to negative twelve newtons divided by the mass which has to be in kilograms and not grams. 2350 grams has to be divided by a thousand to get kilograms or simply move the decimal back three spaces or 2.35 which we can round to 2.4 kilograms. The reason we round to 2.4 is 12 nearly divides nicely by 2.4. We’ll use the decimal trick here to move the top and bottom one over to the right. If you’re not comfortable with this, go back to my MCAT Math series on my website leah4sci.com/MCATMath. This gives us a hundred and twenty which we’ll just look at as twelve times ten over twenty four.  Twelve is half of twenty four giving me one over two and ten over two is equal to five, don’t forget the negative sign  which gives us an acceleration of negative five meters per second squared. Negative implies it’s opposite the direction of motion.

We’ll add negative five meters per second squared to our list of equations and now go back to the Kinematic concept of which equation do we use?  When we have initial final velocity, delta x, and acceleration, we want to use the time independent equation that says V final squared is equals to V initial squared plus 2a delta x. since the final velocity is zero, we’ll cross that out and then start to isolate the delta x which is what we are trying to solve. We’ll bring the initial velocity over to the other side giving us the equation negative initial velocity squared is equal to two a delta x and then we’ll divide by 2a isolating delta x.  Delta x is equal to negative V initial squared over 2a so let’s go ahead and plug it in. we have negative times eight meters per second squared divided by two times negative five meters per second squared. The negatives cancel out so that we’re going to have a positive value and then we’ll just have to do the math. Eight squared to sixty four divided by two times five which is ten. Sixty four over ten means we can use the factor of ten trick just move the decimal back one space for an answer of six point four, now let’s take a look at the units. 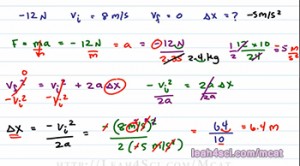 Meters per second squared means that we have meters over meters per second so let’s distribute that into the equation. The seconds square cancels and the meters square we only cancel one because we only have one meter in the denominator which leaves me with the final unit of meters which is correct for a delta x calculation.

In the upcoming videos I’ll cover Newton’s laws and then the various forces that you have to know including Normal Force, Gravitational, Tension, Static and Kinetic, Friction, Centrifugal Force, and Rotational such as Torque.

You can find this entire series along with my Forces cheat sheet along with my practice quiz by visiting my website at leah4sci.com/Forces.

Are you overwhelmed by the sheer volume of information required for the MCAT? Are you worried that lack of a proper study plan and low MCAT score will prevent you from getting into Medical School? My new eBook The MCAT Exam Strategy A 6-Week Guide to Crushing the MCAT will help you formulate a concrete study plan by helping you figure out where you stand now, identify your goals and figure out what it takes to reach them and it’s yours FREE when you sign up for my email newsletter at McatExamStrategy.com. By signing up for my email newsletter, you’ll also be the first to know when I have new videos, MCAT Study Guide Cheat Sheets, Tips and so much more! The link again MCATExamStrategy.com

While the pre-2015 MCAT only tests you on science and verbal, you are still required to perform … END_OF_DOCUMENT_TOKEN_TO_BE_REPLACED

Keto Enol Tautomerization or KET, is an organic chemistry reaction in which ketone and enol … END_OF_DOCUMENT_TOKEN_TO_BE_REPLACED