Reaction Overview: The alkene halogenation reaction, specifically bromination or chlorination, is one in which a dihalide such as Cl2 or Br2 is added to a molecule after breaking the carbon to carbon double bond. The halides add to neighboring carbons from opposite faces of the molecule. The resulting product is a vicinal (neighboring) dihalide. 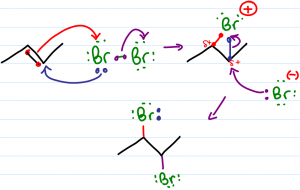 What Exactly Goes On In This Reaction?

Unlike the hydrohalogenation reaction mechanism, the electrophile in this reaction is a neutral and non-polar molecule. At first glance the dihalide may not appear to be electrophilic. When the halogen molecule is exposed to a nucleophile, its electrons are ‘scared away' in the direction of the second attached halide. For this fraction of second, the closest halogen has an induced partial positive charge and is considered to be electrophilic.

Attack of the pi bond:

Nucleophilic electrons in a pi bond are strong enough to induce a temporary polarity on a neutral halogen molecule such as Br2 or Cl2. The pi electrons will then reach out to grab the temporarily partially positive halogen.

I like to think of this step as retaliation. As soon as the halogen is attacked, it will lose its partial positivity, ‘get angry' and attack right back using one of its lone electron pairs. The unaffected halide wants no part in this. It grabs the bonding electrons and breaks away from the molecule. Alone in solution, with a full octet, the halogen carries a negative formal charge.

Let's look back to our starting molecule. The carbon to carbon double bond broke when the halogen got attacked. The 2 carbon atoms are now each bound by a sigma (single) bond to the halogen. The resulting intermediate is quite unstable with a 3-membered ring composed of 2 carbon atoms and 1 halogen. To add insult to injury, the halogen has a formal charge of +1 with 2 bonds, and just 2 lone pairs. 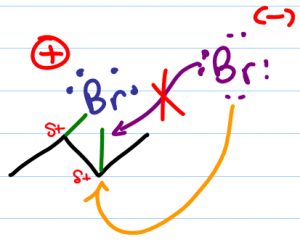 The second halide which broke away at the start of this reaction is ready to attack. Despite being happy with a complete octet, its negative charge makes it highly nucleophilic. As a nucleophile, the halogen is attracted to partially positive carbon atoms in the bridged molecule.

The resulting product has 2 halogens attached on opposite sides or ‘anti' to each other. This happens when the incoming nucleophile is forced to attack from the opposite face of the molecule when compared to the bridge location.

If the halide attempts to attack from the same side of the molecule, the bridge bonds will hinder or block its electrons from reaching the partially positive carbon atom.

Instead, the halide must approach from the opposite side of the bridge where it can use its lone pair of electrons to attack the carbon atom. Since carbon can only have 4 bonds, this attack forces carbon to let go of the bridge halogen, thus breaking the bridge. The unhappy halogen was already pulling so hard on the bonding electrons that this bond is considered easy-enough to break.

The resulting molecule is considered a vicinal dihalide given that the 2 halogen atoms are attached to neighboring carbons. The very carbons that used to hold a pi bond.

A Note About The Solvent:

While the pre-2015 MCAT only tests you on science and verbal, you are still required to perform … END_OF_DOCUMENT_TOKEN_TO_BE_REPLACED

Keto Enol Tautomerization or KET, is an organic chemistry reaction in which ketone and enol … END_OF_DOCUMENT_TOKEN_TO_BE_REPLACED